Snooker & Billiards Ireland would like to congratulate our Irish Juniors in the 2021 European U-18 & U-21 Snooker Championships in Portugal this week. The journey ended today for Ross Bulman when he was beaten by Florian Nüßle from Austria in the last 16 2-4. Aaron Goldrick was also beaten in a decider 3-4 in the last 48 by Daniel Sciborski from Germany. Earlier Ross had a great win over Erik Nagy from Hungary 4-0 in the last 32 and topped his group.

All the eight players Alex Currid, Mark Gleeson, James O Connell, Noel Gleeson, Aaron Smith, Lewis Casserly, Ross Bulman, Aaron Goldrick played their hearts out and wore the waistcoat with pride this week. National Coach PJ Nolan said he was very proud of each player as they gave it 100% in all matches.

All eyes now go to Brendan O Donoghue and Greg Casey in the European 6red Championships tomorrow and then the Men’s and Masters Championships. 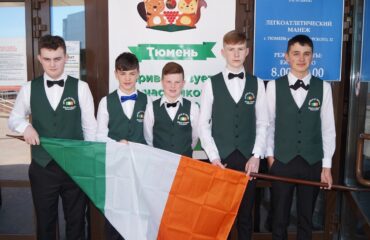 IBSF World U-21 – Semi Finals Boileau is out