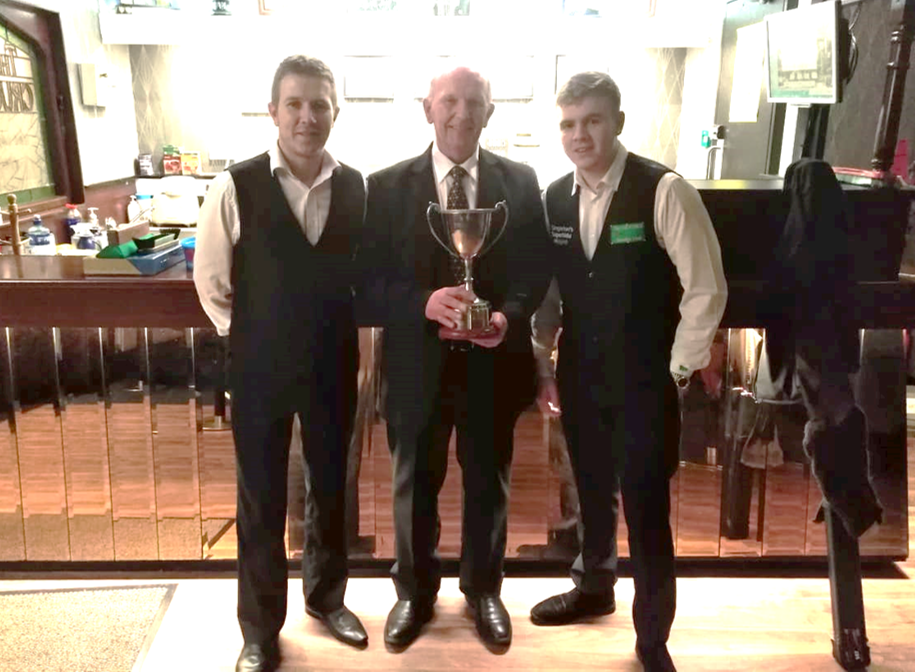 Brendan O Donoghue won the 4th RIBSA Senior Snooker Ranking event of the season ” The Premier Cup ” Sponsored by DBSL” on Saturday / Sunday the 11th & 12th of January in the Crucible Snooker Club in Cork City.

In the final Brendan played Aaron Hill from the Crucible SC Cork in a fantastic final for the Premier Cup but it was the experienced Nenagh player who retained the title to win 4 frames to 3. It was the third year in a row that Brendan has won the Premier Cup after winning it in 2018, 2019 and now 2020.

Aaron Hill almost made a 147 break in the event when he went all the way to pot 15 reds and 15 blacks, then the yellow, green, brown and Blue to narrowly miss the pink. The 134 won the highest break prize so well done Aaron !!! In the semi finals we had four superb players after a long days play with Aaron Hill playing team mate Greg Casey and Brendan playing Davey Morris from the Kilkenny Shed. Both matches were very high quality with Aaron beating Greg 4-2 and Brendan beating Davey 4-3. Shocks in the events

There was a number of great matches but the main shocks were 14yr old Leone Crowley from Cork beating No.1 seed Rodney Goggins and James Bateman beating Ross Bulman.

The owner of the Crucible Mr. Finbar Corkery and the manager Dave Joyce deserve great credit for all the work they have done in the club.  As soon as you walk in the door you are greeted with a warm friendly smile and a welcoming atmosphere.

It’s a pity more players did not make the journey to a venue that will be hosting more RIBSA tournaments.  There are 7 snooker tables and I only received one complaint, that was from a local who said that number 2 was playing a little bit slow.

Aaron Hill was extremely unlucky when on a maximum, he missed the Pink.  Well done to Brendan O’Donoghue on winning the tournament.  Many thanks to Gerry Russell for refereeing and again thanks to Finbar Corkery and Dave Joyce and staff for allowing us use the Crucible for one of our flagship events.

RIBSA would like to thank all the players on making it a great return to holding Senior Events in Cork. TD Ger Murray on running the event. RIBSA Referee Gerry Russell and Fermoy man Brian Walsh who kept the tables running well all day. They would also like to thank the DBSL for sponsoring the Cup. Please Note : The Closing date for entries for Event 4 in Cork will be Thursday the 9th of January at 1pm ONLY Enter Via the On-Line Payment System

The only way to enter any RIBSA event now is via the new on line payment system.

The top 16 players should be reminded that they will no longer be entered into senior tournaments automatically. They will need to enter each event themselves. Players will have to first pay their membership and register for the season. When they register, they will be asked to create a username and password before they will be allowed to enter an event. Any issues with entering they should email info@ribsa.ie.

Please Note: Any player who has already paid their yearly RIBSA membership must redo this process on line and they will be refunded when they arrive at their first tournament.

All RIBSA Senior Ranking Tournaments will he held on Saturday & Sunday as per Calendar of Events.

‘Following representation from Club owners RIBSA have decided to introduced one day / one event membership fee. The cost of this membership is €7.00 and is only valid for the 5 day duration of each particular event. It is hoped that this will encourage more participation in RIBSA Events ”

The 2019 – 2020 RIBSA Senior Snooker Ranking Series will feature 6 Ranking events and the National Snooker Championships this season.  These rankings will be used to select the senior International players.

Players are asked to note that the prize fund for tournaments in 2019/20 season will depend on number of entries less tournament expenses.  Prize fund and expenses will be announced on the day at each event.  Expenses will include payment of Tournament Director, Referees and payment of €2 per player to host club. 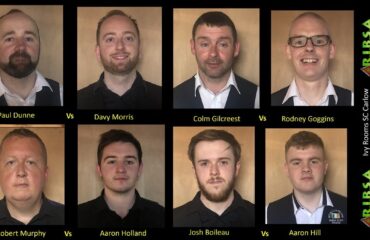