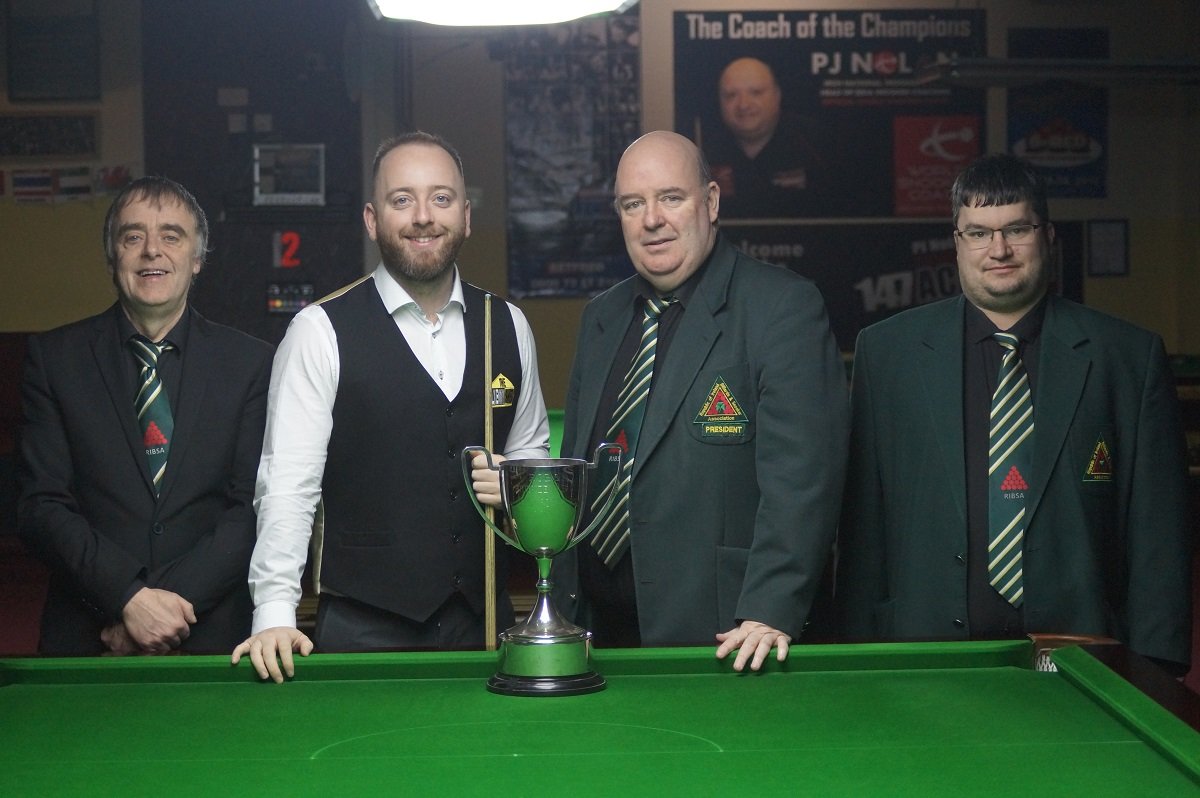 Davy Morris from the Kilkenny Shed won the third RIBSA Senior Snooker Ranking event of the season ” The Presidents Cup” sponsored by Eamon Kearns on Saturday / Sunday the 14th & 15th of December in the the Ivy Rooms SC Snooker Club in Carlow.

RIBSA President Jim Leacy was on hand to present to cup to Davy. RIBSA would like to thank all the players on an excellent event and TD’s Shane Mason and Ger Murray on running the event. RIBSA would also like to thank referees Barry Stone and Steven Foster for attending this event.

Davy Morris from Kilkenny Shed played a fantastic final in beating Ryan Cronin 4-3 from Crucible SC Cork, Davy was in fine form all weekend to lift another title for the former professional  player from Kilkenny. RIBSA would like to congratulate Davy on his success on being crowned Presidents Cup Champion for 2019.

This was the first event where all the players had to register and enter via the new on line payment system and RIBSA would like to thank all the players for their support in making this a successful tournament.

RIBSA would like to thank the Ivy Rooms Snooker Club and staff on hosting this 3rd senior event of the season and we would like to wish all the players and club owners, parents and everyone involved in Irish Snooker a Happy Christmas and we look forward to meeting everyone again in 2020. It has been a great start to the season with Brendan O Donoghue winning event 1 in Letterkenny and Rodney Goggins winning Event 2 in Darcy McGees in Dublin. Event 3 was another great event with Davy Morris winning it in Carlow.

All eyes will be on the Crucible SC in Cork for event 4 in January. ENTER NOW VIA ON ONLINE SYSTEM In the Semi Finals on Sunday morning we saw fantastic snooker with Rodney making a new tournament high break with a 131 in his first frame against Davy Morris only to see Davy making a 105 break to level 1-1, Morris won the third frame and then the fourth on the black to lead 3-1. Back came the wexford man with two great frames to level at 3-3. In the decider it was Morris who got in first and controlled the frame to win it 4-3.

In the other Semi final Brendan won the opening frame and frame two was decided on a re-spot which Ryan won to level the match at 1-1. Brendan bounced back to win the third and lead 2-1. Ryan then won the next two to lead 3-2 but Brendan fought back to level 3-3 with a 98 break. In the decider it was the Cork man who won it to reach the final 4-3.

Both Semi final and final Matches were streamed all over the world via www.ribsa.ie and refereed by Barry Stone and Shane Mason. The high break was 131 by Rodney Goggins from Wexford, Rodney also had a 128, with Davy Morris making a 110 while Brendan O Donoghue had a 98 and Ross Bulman had two 93 breaks.

Davy Morris, Brendan O Donoghue, Rodney Goggins and Ryan Cronin all qualified for the semi-finals on Sunday morning at 11am with good victories over top class opponents on the Saturday and in the QFinals. ONLY Enter Via the On-Line Payment System

The only way to enter any RIBSA event is via the new on line payment system.

The top 16 players should be reminded that they will no longer be entered into senior tournaments automatically. They will need to enter each event themselves..

Players will have to first pay their yearly membership and register for the season. When they register, they will be asked to create a username and password before they will be allowed to enter an event.

Only then will players be able to enter a RIBSA Tournament.