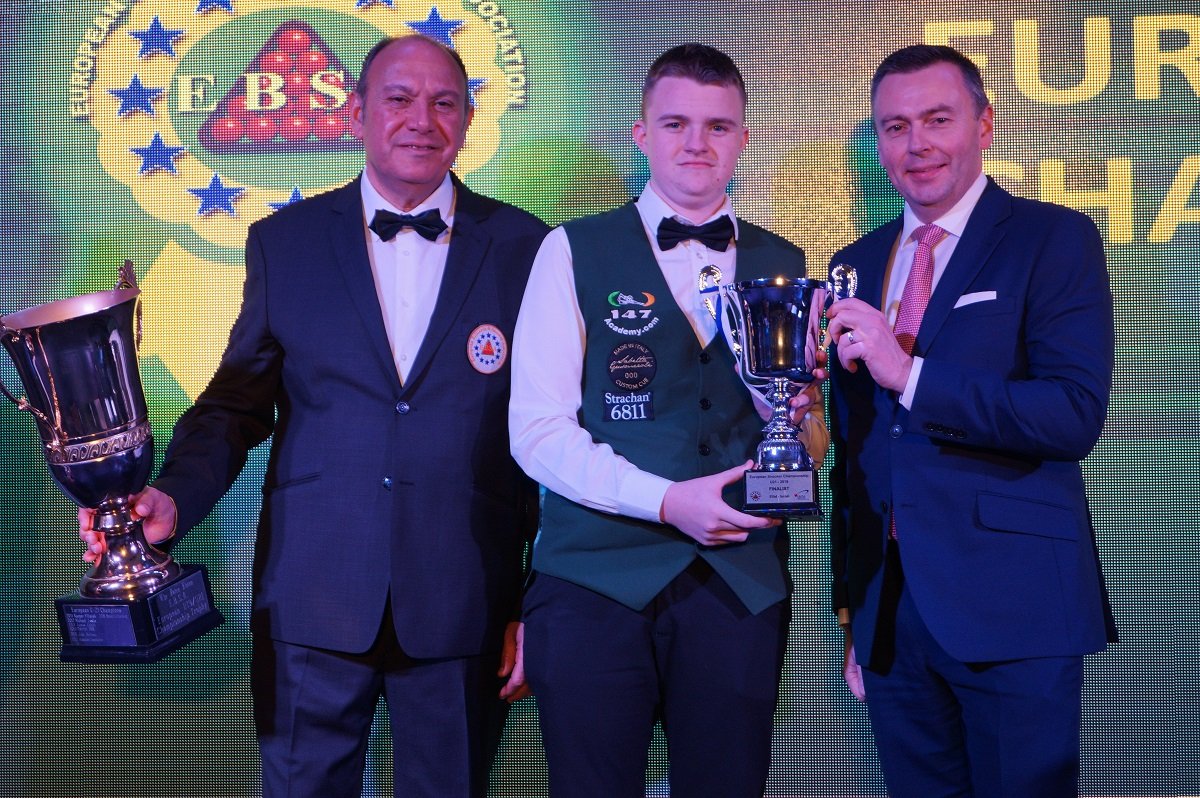 Ireland’s 17 year old Ross Bulman received his runner up trophy in the 2019 Under 21 EBSA Snooker Championships in Eliat Israel at the U Magic Palace Hotel tonight.  Ross received his Trophy from Maxime Cassis EBSA Chairman and Jason Ferguson WPBSA Chairman at the Closing ceremony tonight in front of a full arena.

Ross Bulman was beaten 5 frames to 1 to Jackson Page from Wales in a high standard final. Jackson now wins a 2 year Pro ticket on the main tour but a massive well done to all the Irish Juniors on an incredible event to put Irish snooker back on the map. All four semi finalists started their International careers in the Celtic Challenge and now Jackson wins the European Title and goes Pro. In the final Ross had good lead in frame 1 and 2 but his Welsh opponent fought back to steal both on the black, Frame 3 Jackson got in early to 3 -0 up. Framed 4 seemed to be going to the Welsh potter but the Irishman fought back to steal the frame on the pink to close the gap to 1-3. Jackson then won frame 5 and in frame 6 Jackson got in first and made a century to finish in style to win the Championships 5-1. National Coach PJ Nolan said he was delighted with all the players in Israel, Winning one title and runner up in another. we also had a 14year playing in his first major International reaching the last 16 of the Under 18’s so the future is looking good and with hard work on and off the table i know we can achieve more success for Ireland in the future.

Earlier in the morning the semi finals were played and it was Jackson who beat Aaron Hill who had won the Under 18 European Title on Tuesday but Ross had a fantastic win when he beat Dylan Emery 4-2 to reach his first International final.

Aaron Hill was beaten by Jackson Page from Wales 0-4

This week RIBSA players have achieved: CLICK to follow all the Live Scoring, Live Streaming, Groups, High Breaks, Match Times and Results in the Under 21 Championships

RIBSA would like to congratulate all the RIBSA players on a fantastic European Championships. You can follow all the and action from all the events on www.ebsa.tv