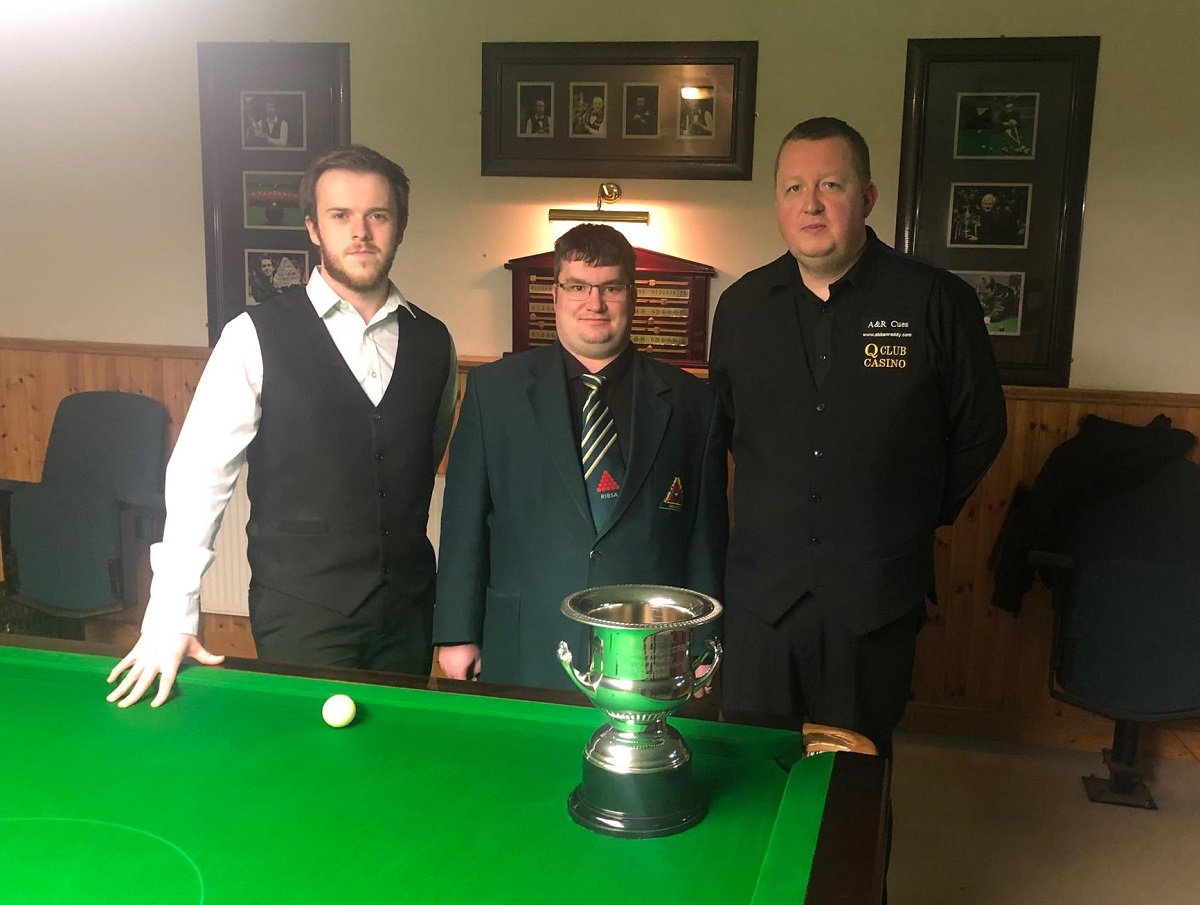 Former Professional Josh Boileau from Newbridge CYMS was back in the winning circle of Irish Snooker when he won the fifth RIBSA Senior Snooker Ranking event of the season  ” The Irish Masters ”  ” Sponsored by Douglas Jewellery Carlow ” in the Newbridge CYMS Snooker Club in Co. Kildare.

In the final Josh beat Robert Murphy from Dublin with a string of breaks to win 4 frames to 1 to claim the Douglas Jewellers Irish Masters Title for 2019. RIBSA Congratulate Josh on his fantastic victory this weekend. On Saturday 9th February at 10am the tournament began and it was battled down to eight players qualifying for the Q-Finals on Sunday morning at 11am after an exciting days snooker to produce a superb quality line up with experience vs youth. The Semi Finals featured three previous ranking tournaments winners in Brendan O Donoghue, Josh Boileau,  Robert Murphy and fast improving Aaron Holland who beat Aaron Hill in his QFinal and is having a great season but today it was victories for Josh Boileau and Robert Murphy who qualified for the RIBSA ranking No.5 final. RIBSA would like to thank all the players for making it a superb event. Newbridge CYMS and Jim Carrick for hosting a successful tournament and finally to TD Tony Thorpe and Referee Shane Mason on running a smooth event. All RIBSA Senior Ranking Tournaments will he held on Saturday & Sunday as per Calendar of Events.

Entry for under 16’s will be free, however all no shows including free entries will be required to pay either Senior or Junior entry fee as appropriate before playing in future tournaments. All players must be members of RIBSA to play in any tournament. Ladies will be allowed free entry to all Senior, Masters, Intermediate and under age events..

‘Following representation from Club owners RIBSA have decided to introduced one day / one event membership fee. The cost of this membership is €5.00 and is only valid for the duration of each particular event. It is hoped that this will encourage more participation in RIBSA Events ” This must also be done on line before the closing date.

The 2018 – 2019 RIBSA Senior Snooker Ranking Series will feature 6 Ranking events and the National Snooker Championships this season.  These rankings will be used to select the senior International players.

Players are asked to note that the prize fund for tournaments in 2018/19 season will depend on number of entries less tournament expenses.  Prize fund and expenses will be announced on the day at each event.  Expenses will include payment of Tournament Director, Referees and payment of €2 per player to host club.