The 4th Annual Timmy Murphy Memorial billiards tournament took place on Sunday 4th November in the Ivy Rooms Snooker Club in Carlow. 16 players took part to play in the event in memory of the billiards gentlemen from Cork who passed away over 3 years ago and the Cork connection in this special occasion is as strong as ever as his fellow Corkonian and AOH clubmate Lloyd Myers retained the trophy in emphatic fashion playing consistent billiards and winning all his matches comprehensively. First round eliminations were Tommy Murphy, Timmy Murphy Jnr, Joe Doheny, John McIntyre, Norman Whaley, Anthony O Flaherty, Sean Dunne and Jason Dowling who was beaten by John Kehoe who produced the high break of the day with 108. The semi finals paired Aonghus McAnally against Kilkenny’s Tommy Denieffe who surprised everyone with wins over Northern Ireland’s John McIntyre and Edenderry’s Liam Byrne but fell short against Aonghus who did enough to book his place in the final against Lloyd Myers who overcame Robert McCrum who was playing solid billiards all the way through before Lloyd’s aggressive and attacking style of play was too hot to handle in the end.

The final saw Aonghus get a 61points head start but Lloyd soon overturned the margin soon after and scored heavily at will with Aonghus struggling to match Lloyd’s scoring power even though the scoreline in the end wasn’t one sided and Aonghus truly earned his in the final on merit. In the end Lloyd took the trophy for second year in a row on a scoreline of 503-359. The high break went Ballindaggin’s John Kehoe with his first ever tournament break of 108.

Well done to Brendan Devlin as always as Tournament Director and running the event    with great enthusiasm. Thanks also to Marian Leacy and staff at the Ivy Rooms Snooker Club who hosted the event again tremendously and  to the Murphy family who appeared on behalf of the late Timmy.

The next billiards ranking event of the season will take place on Sunday 2nd December in Celbridge snooker club in Co.Kildare. To enter text Brendan Devlin on 086 6062420. 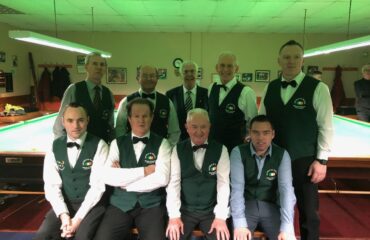