The Republic of Ireland Billiards & Snooker Association have just announced the last 16 line up for the 2018 RIBSA Irish Senior Snooker Championships.

The Championships was played in the Ivy Rooms SC in Carlow on Saturday and Sunday 28th & 29th of April to find the 16 qualifiers. There was three centuries made over the weekend with Michael Judge holding the current high break with a 119 Break, other centuries were 106 by Ross Bulman with 106 and 100 by David Morris. There was a number of upsets on both days with a number of the top seeds eliminated with Johnny Connors beating Robert Murphy, Aidan Devenney beating Stephen Bateman on the Saturday and on the Sunday John Torpey beat the defending Champion Brendan O Donoghue and Joe Delaney beat Chris Cooney. All the other top 16 seeds survived the test to qualify. RIBSA will confirm the full list of time of all matches during the week and it will be announced on the web site. All matches will be refereed and the four tables will be recovered this week ready for the Championships.

Live Streaming will be available to watch live from Carlow in case you cannot be in Ivy Rooms as it promises to be an exciting finale to the season to find the 2018 Senior Champion. 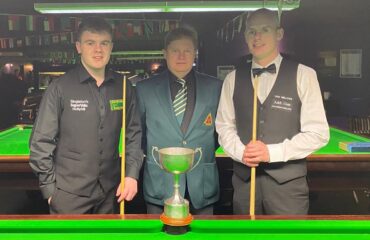