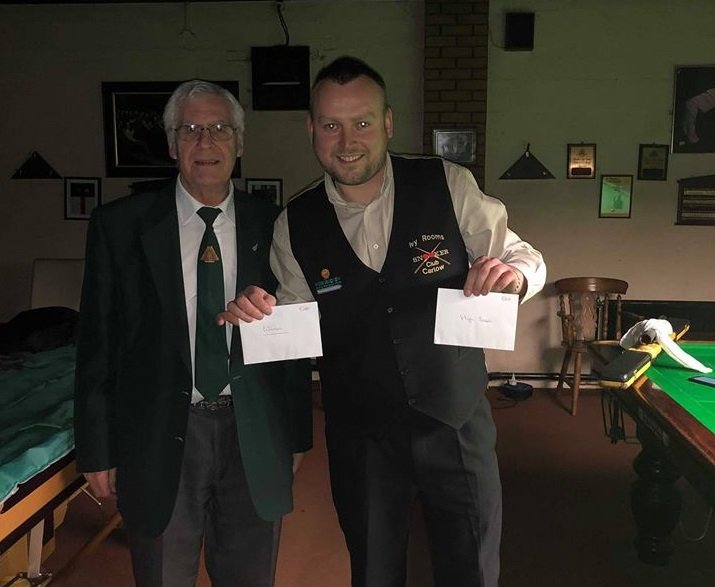 In the final Colvin beat Neil Gudon from Celbridge SC 3 frames to 2 in a great quality match. In the semi finals Colvin beat Dylan Carey from Darcy McGees 3-0 while Neil beat Martin Thorpe from Potters 3-2.

RIBSA would like to thank Celbridge Snooker Club for hosting the successful tournament and thank TD Brendan Devlin and Refeee Shane Mason for making it a great day of Snooker. Finally well done to all the players who entered and we hope to see you all at the Intermediate National Championship in Carlow.

This year featured six exciting RIBSA Intermediate Snooker events around Ireland and a National Intermediate Championship at the end of the season on April 14th in the Ivy Rooms SC in Carlow. Players in the categories listed below are not allowed play in the Intermediate events.

Players in all above categories who feel they have a legitimate reason to be allowed play may apply in writing to RIBSA at info@ribsa.ie to request a review of their status.

Players must be properly dressed for all RIBSA competitions. The dress code is dark shoes, dark one coloured trousers (no jeans), one coloured shirt buttoned at the wrist and waistcoat.

Waistcoats must be worn for all matches. National Waistcoats are not permissible. Matches will commence @ 10.30am.

A Copy of the Rules for all tournaments will be available at the tournaments.

The following players below are ineligible to play

Irish Under 16 No.1 for Landers