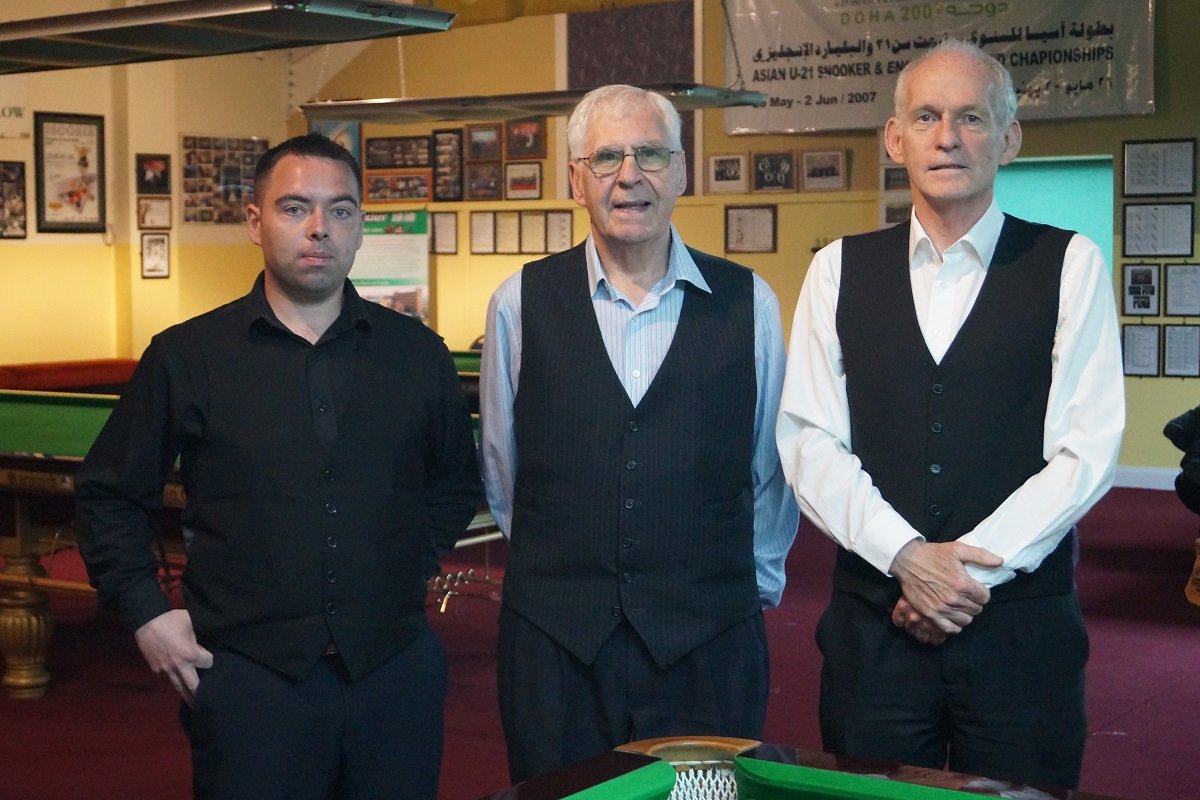 The fifth tournament of the Senior Billiards series was played at Celbridge Snooker Club on Sunday, 14th of January 2018, the format being 400up with a 90 minute time limit. Reigning Billiards short-format champion, Aidan Murray, still smarting from his defeat at the hands of Larry Drennan in the semi final of last month’s tournament, tasted sweet revenge when he turned the tables on Larry in a very open semi final game and then proceeded to take the season’s fifth tournament in a high scoring final.

Early round eliminations were Aonghus McAnally (Portmarnock) and Northern Ireland ex international Tommy Murphy, now resident in the republic and making his very welcome debut on the Senior Billiards scene.

The semi finalists in the top half of the draw were Wayne Doyle (Dun Laoghaire) and John Kehoe (Enniscorthy), Wayne having taken his place in the semi final when he won his quarter final against Lloyd Myers (AOH Cork) by almost double scores while, by contrast, John came through his quarter final against Joe Doheny (Borris-in-Ossory) in the tightest match of the day, taking the game by a mere 2 points. In the semi final, Wayne soon struck winning form, scoring the more freely of the two to claim his place in the final, relatively unchallenged by John.

The semi finalists in the bottom half of the draw were Aidan Murray (Ivy Rooms) and Larry Drennan (Kilkenny Shed), Aidan having takien a solid win in his quarter final match against Robert McCrum (Portmarnock), while Larry had a more intriguing quarter final against Brendan Devlin (Celbridge) in which both players matched each other score for score until Larry, with a timely break of113 established an unassailable lead which he maintained to the finish. From the start of semi final, Aidan took command, scoring the more heavily of the two, finishing well ahead of Larry when time was called.

In the final, Wayne was first to show, amassing an early lead with a useful 82 break. Aidan’s response was immediate and effective, reducing this early deficit with break of 62. As the game progressed there was not much difference in scores until Wayne put in a further 80 plus break. Rising to the challenge, Aidan’s response was to hammer in the day’s highest break, a magnificent 126, in which he never looked like missing, but which he was forced to bring to an end when he reached the hazard limit. Though Wayne competed strongly when at the table, a couple of surprising misses at about the 40 mark in of a couple of breaks when in perfect control at top of the table put him back in his chair where he could only watch as Aidan, although not quite reaching the points-up target of 400 within the time limit, did more than enough to take the fifth tournament title of the season.

The next Senior Billiards round of the season takes place at Celbridge Snooker Club on Sunday, 18th February 2018. The format will be seeded draw, 90 minute timed. Entries will be accepted before 10.30am on the morning of the event.

Our thanks are due to Phil Martin for the excellent playing facilities and to the staff at Celbridge Snooker Club for their help on the day.