The final round of matches in the RIBSA Under 21 International and Open events were held in the Ivy Rooms Snooker Club, Carlow on Sunday the 17th of December.

Stephen Bateman from the Kilkenny Shed won the first qualifying place as the number 1 under 21 player on the RIBSA Senior Rankings.

In the final round of EBSA group matches in the International Tour it was Aaron Hill from the Crucible SC who won the qualifying event with 6 wins and 28 frames. Second was Ross Bulman from Youghal CYMS with 5 wins and 24 frames and the final place went to Aaron Holland from Terry Rogers with 4 wins and 23 frames.

The highest breaks in the EBSA qualifying event was 113 by Aaron Hill just piping Ross Bulman with his 111 break.

Stephen Bateman, Aaron Hill, Ross Bulman and Aaron Holland will now represent the Republic of Ireland in the European Under 21 Snooker Championships in Bulgaria in February which starts on Monday 5th and runs until Friday 9th February.

National Coach PJ Nolan was the TD on the day for both events and said the standard of snooker was superb on the day. The four qualifiers will now focus hard on performing to a high level in Bulgaria in February. RIBSA plan a training camp on Sunday the 21st of January in the Ivy Rooms from 11am – 4pm.

The final EBSA Under 21 Open Snooker event of the season was dominated by Cork players with four Cork junior players in the semi-finals.

In the final it was No.1 seed Dylan O Shaughnessy from Crucible SC and John Landers from Youghal CYMS battling it out for the title.  In frame one it was Dylan who won it to go 1-0 up with a good blue, pink black.  In frame two John built up a good lead and won it to level the match at 1-1. In frame three Dylan won it on the pink to go 2-1 up and one away from the title. Frame four was very close with six reds remaining but it was Dylan who potted well to win the frame and match.

In the semi-finals, team mates Adam Bulman and John Landers faced each other and in the other semi-final it was Dylan O Shaughnessy from Crucible SC and Leone Crowley from Shooters SC battling it out.  In the end it was Landers beat Bulman 3-1 and Dylan beat Leone 3-2 in two great matches.

John Landers had the highest break on the day with a 40 break.

RIBSA would like to thank the Ivy Rooms SC for hosting the event, Referee Conor Doyle and to all the players on making it a big success on the day.

RIBSA would also like to wish everyone a happy Christmas and we look forward to meeting everyone in 2018. 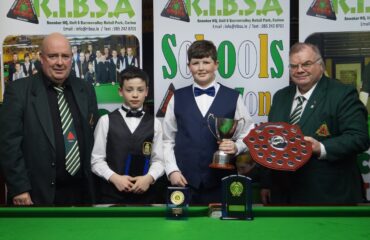 National U-19 Final – Sweeney Vs Landers

National U-16 Final Bulman Vs Whyte