The International tour sees our top 10 ranked juniors playing against each other in an International system similar to what is used in International events. Three more rounds of matches were held today with four frames being played in each match.

Ross Bulman still remains unbeaten with the perfect score of 28 frames from a possible 28. Aaron Hill is in second place with 27 frames with Mark Gleeson and Ronan Whyte coming 3rd and 4th. Final day of matches will determine who qualifies for the European U-18 in Croatia in February. The Highest break on Day 2 was a fantastic 74 break by Aaron Hill.

After three International tour events, the bottom three players will be relegated to the open tour while the top 3 on the Open Tour are promoted to the International IBSF Tour after Christmas. The final EBSA U-18 International Tour will be held on Saturday the 16th of December in Carlow.

The second RIBSA under 18 Open Snooker event of the season was won by 12 year old Aaron Smith from Potters SC in Drogheda when he beat 13 year old Ryan McGuirk from R&R Snooker in Co. Meath 3 frames to 2 in the Ivy Rooms Snooker Club, Carlow on Saturday the 7th of October.

In the first frame it was very tight but it was Smith who potted the vital pink to go one frame up. In frame two Ryan had a big lead by Aaron cleared the colours to win it on the black to lead 2-0. In frame three Ryan built a good lead and the current under 14 National Champion McGuirk won it well on the colours to close the gap to 1-2. Frame four went to Ryan on the black to level 2-2. in the decider Aaron went 50 points up with the help of a 32, back came Ryan with a 33 and the match went to the final black and it was the 12year old who potted a long black to win his first RIBSA title.

Both semi-finals were excellent. It was Aaron Smith who beat birthday boy 11 year old Ronan McGuirk from R&R SC 3-1 in the first semi. Ronan had a fantastic result when he beat the number 1 seed Keith O Reilly from Newbridge CYMS in the previous round 3-2. In the other semi Ryan McGuirk beat John Joyce from Classic SC Dublin 3-1.

National Coach PJ Nolan was the Tournament Director for both events. ‘’ PJ said he was delighted with the standard of snooker on the day. Bulman, Hill, Gleeson and Whyte are pulling away in the International tour and the final day of matches will be very exciting. The open event was again brilliant with two very young players in the final and this goes well for their development ” Aaron Smith won his first RIBSA title and Ryan McGuirk was playing in his third RIBSA final in 8 days after reaching the U-14 and U-16 finals last weekend. Both are closing in on their qualifying spot for the next U-18 International tour.

Open Tour Event 3 will be held on Saturday the 16th of December in Carlow.

RIBSA would like to thank all the players and parents for making it a big success.  The Ivy Rooms for hosting the events and to Ger Murray for being the Referee on the day.  RIBSA are looking forward to seeing everyone on day 3 on Saturday the 16th of December in Carlow. 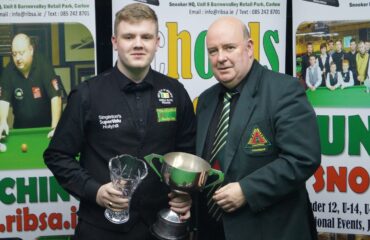 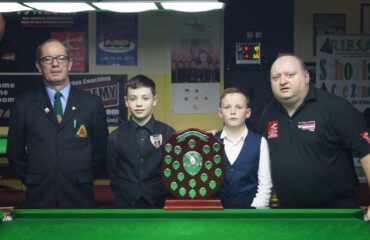 147academy U-12 Final Crowley Vs O’Brien