The second tournament of the Senior Billiards series was played at the Ivy Rooms Snooker Club, Carlow on Sunday, 1st of October 2017, the format being 400up with a 90 minute time limit. Reigning Billiards Long-up champion, Wayne Doyle, still smarting from his defeat at the hands of Larry Drennan in the semi final of the opening tournament of the season, tasted sweet revenge when he turned the tables on Larry in a dramatic and very tight semi final and then proceeded to take the season’s second tournament in a high scoring final.

Early round eliminations were John Kehoe (Enniscorthy) and Brendan Devlin (Celbridge), bowing out at the hands of Lloyd Myers (AOH Cork) and Joe Doheny (Borris-in-Ossory) respectively.

The semi finalists in the top half of the draw were Aidan Murray (Ivy Rooms) and Joe Doheny (Borris-in-Ossory), Aidan having had a convincing quarter final win over Tommy Denieffe (Kilkenny Shed), while Joe came out victor in a very tight quarter final against Lloyd Myers (AOH Cork). In the semi final, Aidan was quick to take the upper hand, including a useful early 56 break and then scoring the better of the two when at the table, not quite reaching the points-up target of 400 within the time limit but doing more than enough to claim his place in the final.

The semi finalists in the bottom half of the draw were Wayne Doyle (Dun Laoghaire) and Larry Drennan (Kilkenny Shed), Wayne having had a convincing win in his quarter final against Aonghus McAnally (Portmarnock) while Larry sailed through his quarter final in equally convincing style against Robert McCrum (also Portmarnock). The semi final turned out to be quite a dogged affair with never much more than 40 points between the two and neither player hitting anything like top form. It was a very just reflection on both players’ performance that scores were tied at 313-313 when the time limit was reached. Invoking the rule for tied matches, play continued for a further 9 minutes. As the clock ticked by, Larry was at the table making up the ground he lost at the beginning of extra time, but found himself still 9 points adrift when extra time expired, leaving a relieved Wayne to claim his place in the final.

In the final, Aidan was first to show, amassing an early 90 plus lead without significant response from Wayne and looking the more settled of the two. Wayne, despite battling on determinedly, found himself making mistake after mistake and breaking down surprisingly easily on basic elementary shots. When things were looking this bleak, seemingly from nowhere and certainly against his run of play, Wayne produced a well constructed 70 break to bring himself back into the game. It was as though an unseen hand had thrown a switch, turning Wayne’s game around from one of malaise while at the same time doing exactly the opposite to Aidan, allowing Wayne first to recover the deficit and then to proceed, outscoring Aidan at each visit, to take the second tournament title of the season by more than 200 points.

The next Senior Billiards round of the season takes place at The Ivy Rooms Snooker Club, Carlow on Sunday, 15th October 2017. The format will be seeded draw 90 minute timed. Entries will be accepted before 10.30am on the morning of the event.

Our thanks are due to Marian Leacy and the staff at the Ivy Rooms Snooker Club for the excellent playing facilities and for their help on the day. 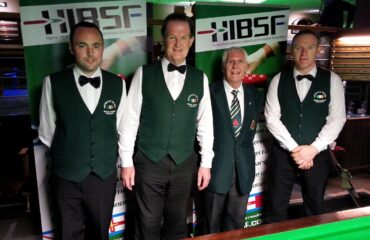