The first RIBSA U-16 Snooker Ranking Tournament of the season was won by Number 1 seed Aaron Hill from the Crucible Snooker Club in Cork City.

In the final it was Aaron Hill and Ryan McGuirk who were the two top seeds for the event and members of the newly formed RIBSA Elite Squad who contested the final in the Ivy Rooms Snooker Club in Carlow on Saturday the 30th of September.

National Coach PJ Nolan was the Tournament Director on the day. He was impressed with new talented players like Jack Newman from Fermoy CYMS who reached the Q-Final plus Sean Paul Crowley from Shooters and Carl Smith from Classic who were playing in their first RIBSA events.

In the semi-finals it was No. 1 seed Aaron Hill from Crucible SC Cork against Leone Crowley from Shooters SC Cork and John Landers from Youghal CYMS against No.2 seed Ryan McGuirk from R&R SC in Meath.  Both matches were superb from four young stars with Crowley and Landers pushing the Number 1 and 2 seeds all the way but it was Hill and McGuirk who came out winners 3-1 on the day.

To celebrate the 2017 European Week of Sport. The Republic of Ireland Billiards & Snooker Association had offered free entry into this first RIBSA under 16 Snooker ranking tournament.

All the matches were the best of five frames including the final. The standard was very high and RIBSA referee Conor Doyle was there all day to oversee the event.

RIBSA would like to thank all the players who competed, Referee Conor Doyle for all his work on the day and the Ivy Rooms SC Carlow for hosting another successful event. 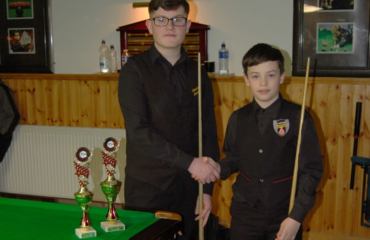