The first tournament of the Senior Billiards series was played at The Ivy Rooms Snooker Club, Carlow on Sunday, 10th of September 2017, the format being best of three games of 150up. Aidan Murray (Ivy Rooms) opened his season in emphatic style with clean-sweep 2-0 victories in his early matches and a 2-1 win in the Final.

Early round eliminations were Dun Laoghaire brothers Ross and Gavin Doyle, Robert McCrum (Portmarnock) and Tommy Denieffe (Kilkenny Shed).
The semi finalists in the top half of the draw were Larry Drennan (Kilkenny Shed) and Wayne Doyle (Dun Laoghaire), Larry recovering from 1-0 down in his quarter final against Aonghus McAnally, by stamping his authority in the next two games while Wayne had little difficulty taking a quarter final win over Lloyd Myers (AOH, Cork). In the semi final, Wayne struggled to find the form that brought him last season’s long-up championship and No 1 ranking position and not being helped by having to use a borrowed cue when he badly damaged his tip, found himself having to yield to Larry who proved to be the better player on the day.

The semi finalists in the bottom half of the draw were Joe Doheny (Borris-in-Ossory) and Aidan Murray (Ivy Rooms), Joe taking a good 2-0 win over Brendan Devlin (Celbridge) in a match closer than the result might suggest while Aidan came through his quarter final relatively unchallenged by Gavin Doyle (Dun Laoghaire). The semi final turned out to be a very one-sided affair, Aidan claiming his place in the final by winning the first game well and then taking the second before Joe got a chance to score.

In the Final, Larry was first to show, opening the scoring with an early 50 break and scoring the better of the two to take the opening game by double scores. Larry then took an early lead in the second game but, when it looked like he was taking control, Aidan recovered the deficit with a timely 60 break which helped him secure the second game. The third and deciding game turned out to be a dogged struggle, both players having difficulty trying to control the balls which repeatedly ended up in safe positions, leading to protracted bouts of double baulks and safety play. Showing surprising stamina at the end of a long day’s play and having striven valiantly throughout the deciding game, Larry found himself suffering slightly the worse of the balance of play, leaving a relieved Aidan to take the opening tournament of the season.

The next Senior Billiards round of the season takes place at the Ivy Rooms Snooker Club, Carlow on Sunday, 1st October 2017. The format will be seeded draw 400up, 90 minute time limit. Entries will be accepted before 10.30am on the morning of the event. 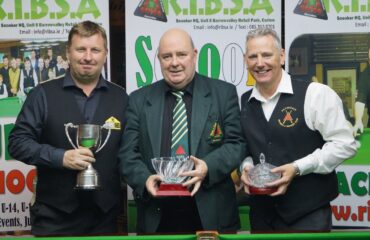