Day 3 was another successful day for our RIBSA Senior & Masters teams at the 2017 Home Internationals Snooker Championships in the Northern Snooker Centre in Leeds.

The Republic Of Ireland Seniors Michael Judge, TJ Dowling, Robert Murphy and John Farrell remain unbeaten and they had a fantastic victory over the Defending Champions Scotland in the afternoon session 8 frames to 4.  They then beat Guernsey 12 frames to nil in the last session of the day to set up a shootout with Wales at 9am and England at 1pm on the final day tomorrow. Two wins will ensure the Prince of Wales title for the Irish team.

RIBSA Masters Keith Sheldreck, Jim Carrick, Brian McPhee and Stephen Walsh had a great 12-0 victory over Isle of Man in the morning session but they were beaten 2-10 by England A in the final session of the day.  Their final match is against Wales B tomorrow at 9am.

CLICK ON THE HIBSF WEB SITE for links to all the full results from Leeds. Come on Team Ireland!!!! 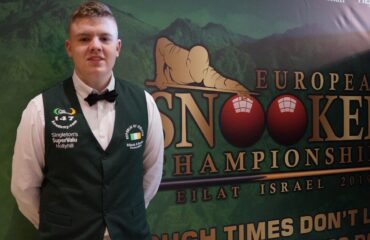