Republic of Ireland player Noel Landers played his Q-Final in the 2017 World IBSF Under 21 Snooker Championships in Beijing China tonight against No.3 seed Zhang Jiankang from China in a best of 9 frames match.

In frame 1 his Chinese opponent won it to lead 1-0, Noel led by 31 with one red remaining in frame 2 only to see Zhang clear to go 2-0 up. Zhang then grew in confidence winning the next two frames to go 4-0 up. Landers fought back to win frame five to close the gap to 1-4 only to see Zhang win the next frame to seal victory 5 frames to 1.

The Youghal cue man playing in his first major International Q-Final performed excellent. The 2hr break after his great win this morning took a lot out of him for the Q-Final. Over the past 10 days Noel has made the last 24 of the World 18’s and now the last 8 of the World 21’s and beaten a string of world class opponents. He has grown in confidence over here and with more hard work he can push his game to a new level over the next few seasons.

Noel and all the Irish players have performed excellent here in China.  All the players are underage for another few season and this experience will only improve their games and this bodes well for their development and Irish Junior Snooker. Each player should be very proud of themselves as they were great ambassadors for our country.

In the QFinals this year we had one Irish, one German, two Welsh, three Chinese and one Indian player and the standard was very high in this 2017 Championship with the eventual winner receiving a place on the main professional tour next season.

You can follow all the live scoring and results from China on www.ibsf.info and on www.ebsa.pl 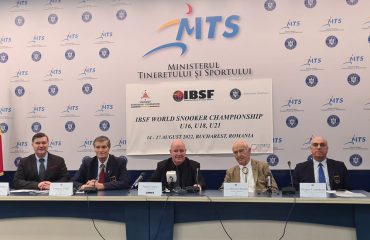