The Pat O’Sullivan Memorial handicap tournament was played at Carlow on Sunday, 14th of May 2017. After a day’s play, which saw many games decided on close margins, reigning short format champion Aidan Murray emerged the well deserved winner on the day, winning all his matches despite the significant handicap start he had to give his opponents.

Play started at 11.15am and by the lunchtime break the first round eliminations were James Bateman (Kilkenny), compatriot and long-time practice and travelling partner of the late Pat O’Sullivan, Larry Drennan (Kilkenny), Brendan Devlin (Celbridge), Liam O’Brien (Borris-in-Ossory) and Robert McCrum (Portmarnock).

The semi finalists in the top half of the draw were John Kehoe (Enniscorthy) and Wayne Doyle (Q-Club Wicklow), John having had a very close quarter final win over Joe Doheny (Borris-in-Ossory) while Wayne came through his quarter final relatively unchallenged by Brendan Devlin (Celbridge). In the semi final, Wayne, struggling from the effects of a heavy cold and playing below his normal standard couldn’t find what it would take to overcome the handicap start he was giving John, leaving John to claim his place in the Final.

The semi finalists in the bottom half of the draw were Anthony O’Flaherty (Rathkeale) and Aidan Murray (Ivy Rooms). Anthony progressed to the semi finals having survived a tough quarter final match with Liam O’Brien (Borris-in-Ossory), while Aidan secured his semi final place by gradually whittling away at the 150 point handicap start he was giving his quarter final opponent Robert McCrum (Portmarnock) until eventually, having caught and passed him, he took the match by a margin of 55 points, thanks largely to two timely fifty-plus breaks. The semi final was all about Aidan, scoring heavily when at the table, quickly brushing aside the handicap start he was giving Anthony to claim his place in the Final, again with a succession of half century breaks.

The Final turned out to be an enthralling and free flowing game, Aidan opening his account in his first scoring visit with a 50 break, to be followed immediately by John with break of 43. In the early stages, the players matched each other score for score until John, with a succession of no-score visits found himself going through a lean patch. No such difficulties affected Aidan’s game and scoring by far the more heavily of the two, earned himself a well deserved tournament victory on the day.

As always, our thanks are due to Marian Leacy for the excellent playing facilities and to the staff at The Ivy Rooms for their help on the day.

It was also a great pleasure to have Noel O’Sullivan, brother of the late Pat, in attendance to make the presentations to the finalists.

Results (all matches 400 up, handicapped): 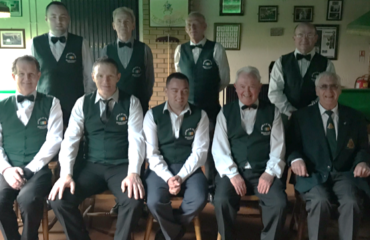