Aaron Hill from Cork will play Ross Bulman from Youghal CYMS in the 2017 National RIBSA U-16 Snooker Championship Final after both played superb snooker in the Ivy Rooms Snooker Club, Carlow on Sunday the 26th of March.

The Under 16 final will be played during RIBSA finals weekend on the 6th and 7th of May. All matches started at 10.30am and National Coach PJ Nolan was the Tournament Director and he was very impressed with the talent on show.

In the semi finals Aaron Hill beat Aaron Goldrick 3-0 and Ross Bulman beat young Ryan McGuirk 3-2 in a great battle. Ross Bulman holds the high break so far with a superb 97 break in the S-finals.

RIBSA would like to thank all the players, the Ivy Rooms SC for hosting the event and Referee Conor Doyle on making the day a big success. The U-16 final proimses to be a fantastic match with two of our big stars of the future looking for this National title.

The 2017 Home International U-16 Team is now confirmed with Ross Bulman, Aaron Hill, Aaron Goldrick and Ryan McGuirk on the team for Leeds from the 14th – 17th of August. 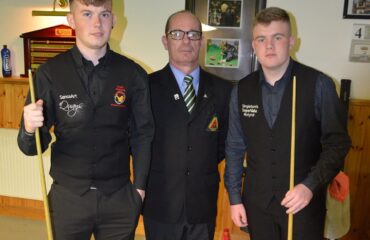