Aaron Hill from Cork won the first IBSF / RIBSA U-18 Snooker Ranking event of the season in the Ivy Rooms Snooker Club, Carlow on Saturday the 7th of January.

14year Aaron Hill now qualifies to play in the World IBSF Under 18 Snooker Championship in China in July 2017.

The highest Tournament break was 69 by Mark Gleeson earlier in the event.

RIBSA would like to thank the Ivy Rooms for hosting the event and to Referee Paddy Hanifin for making the event a big success on the day.

The winner of each RIBSA U-18 event and the National U-18 Championship this season will receive a place at the World U-18 Championships in China. Event 2 will be held the 18th of February in the Ivy Rooms SC.

Our National Coach PJ Nolan was the Tournament Director and all the matches were the best of 5 frames and the action started at 10.30am. 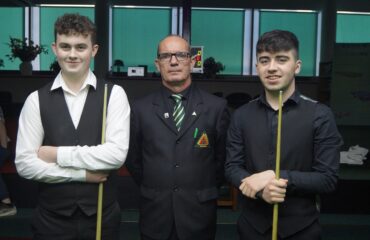