The second Timmy Murphy Memorial handicap tournament was played at Carlow on Sunday, 6th of November 2016.  After a day’s play, which saw many interesting games and several surprise results, the trophy went to current double National Champion Wayne Doyle (Q-Club Wicklow), a fitting reward for the consistently high standard of play he showed throughout the day.

The semi finalists in the top half of the draw were Andy Kehoe (Enniscorthy) and Northern Ireland guest player Frank Trainor.  Andy, the surprise semi finalist of the day, gained his semi final place with good wins in close matches with Liam Byrne (Edenderry) and Northern Ireland guest player Tommy Hunter while Frank survived a close encounter in the quarter final against Jason Dowling (Rathkeale) and an even closer game in his opening round against Lloyd Myers (AOH Cork) despite a spirited 62 break by Lloyd.  In the semi final Andy, perhaps feeling the tiring effect of a long day’s play, couldn’t quite maintain the rate of scoring he achieved in the earlier rounds, leaving Frank to claim his place in the final, relatively unchallenged by Andy.

The semi finalists in the bottom half of the draw were Robert McCrum (Portmarnock) and current double National Champion and eventual winner Wayne Doyle (Q Club, Wicklow). Robert progressed to the semi final with decisive wins in the earlier rounds against Finbar O’Connor (AOH Cork) and last year’s winner Joe Doheny (Borris-in-Ossory) while Wayne, playing like a champion, had solid wins in his earlier rounds against Kilkenny players Larry Drennan and James Bateman respectively, scoring a succession of 50+ breaks in every round including the day’s high break of 106.  In the semi final Wayne, who had been playing well all day, stepped up his game even further to claim his place in the final, relatively unchallenged by Robert.

The Final turned out to be an enthralling game, Wayne being first to show, quickly making inroads into the handicap deficit only to have Frank make a spirited response. As the game progressed, however, Wayne’s more consistent play and generally higher level of scoring when at the table began to tell, enabling him first to draw level and then to draw ever further ahead, amassing a margin of almost 200 points one hour into the game.  At this point it was clear that something special would be needed if Frank were to mount anything like an effective counter challenge.  However, perhaps with a long journey from the North to Carlow behind him, followed by a long day’s play it is little wonder that he couldn’t muster what was needed, leaving Wayne to claim a well deserved Timmy Murphy Memorial Trophy.

It was a great pleasure to welcome so many of the Murphy family to the event where Phyllis made the presentation to the winner in memory of her late husband Timmy.  By way of compensation for his first-round elimination by the slenderest of margins, John Kehoe emerged winner of the plate.

As always, our thanks are due to Marian Leacy for the excellent facilities and to the staff at The Ivy Rooms for their help on the day. 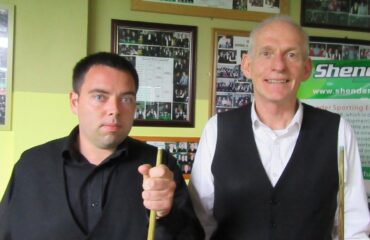