Admin
Friday, 27 May 2016 / Published in International

The European Championships will be held in Vilnius, Lithuania from the 31st May to the 11th of June.

National Coach PJ Nolan will travel with the team and guide them in Lithuania. He will hold three training days to prepare the players on Wednesday the 20th of April, Friday the 29th of April and Wednesday the 11th of May in the Ivy Rooms Snooker Club in Carlow from 11am – 4pm.

The Schedule of the Championships:

4th June – Start of the individual Masters and Ladies championships at 16:00

10thJune – Finals of Individual Masters and ladies Championships at 18:00

Upon arriving at the airport, everyone will be met by a Lithuanian Association representative who will direct participants to the local train, to travel from the airport to the city every 30 minutes between 0600-21:30.  The cost of a ticket is €0.72c.  The Panorama Hotel is located opposite the station.  Further information is available at http://www.litrail.lt/en

Venue with 16 tables will be located at Compensa Arena, Lvovo Street 25, 09320, Vilnius.Transport will be provided every hour between the hotel and the venue.

Practice facilities will be available at 2 local clubs in the City. Practice will be free of charge from 09:00-1400. After 14:00 practice will be chargeable.

Each championship will require an entry fee of €60 per player (€120 per team).  All entry fees will be paid as prize money in each championship, as per the EBSA Tournament Conditions.

RIBSA would like to wish all the players good luck in the Championships !!!!!!! 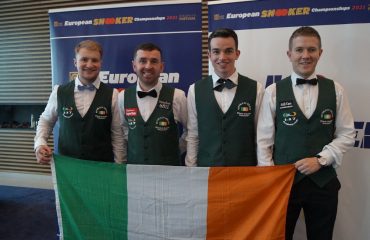 EBSA U-18 Hill into the Q-Finals