The annual Billiards International North-South Challenge Tournament took place at Celbridge Snooker Club on Saturday and Sunday, 23rd and 24th April 2016.  The format of the series was that each team of eight was divided into two groups of four, so that each player met four opponents from his corresponding group, with the consequence that all benefited from the variety of games the format provided.

Play started at 10.30 on Saturday morning, the first session being shared 4-4. In the second session the Southern team edged ahead with a 6-2 sessional result. The resulting 4 points differential was maintained when the third session was again shared. The fourth session, which wrapped up Saturday’s play saw the Southern team forge ahead, taking the session 7-1, leaving them in a strong overnight position 21-11.

When play resumed on Sunday morning, it was clear that the Northern team needed a good start to have any chance of producing a favourable tournament result. When the first two sessions both went 6-2 in favour of the South, however, this left the South in a mathematically unassailable position, leaving the last two sessions to be played out mainly as a formality.

Our thanks are due to Phil Martin and the staff at Celbridge Snooker Club, for the excellent playing facilities they provided and who made the players most welcome and did so much to contribute to the success of the tournament.

Congratulations to the Southern team on a well deserved victory and commiserations to the North whose play was not justly reflected in the final score line. 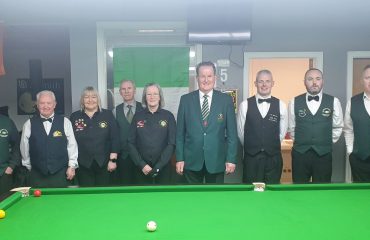