The second and final IBSF Under 18 RIBSA qualifier was held today in the Ivy Rooms Snooker Club, Carlow on Sunday the 24 of April.

Fergal Quinn from Coalisland and Noel Landers from Youghal played fantastic snooker to qualify today after they beat Shane Hourihane and Aaron Goldrick in their final match today.

They will now join Charlie Sweeney Newbridge CYMS and Ross Bulman from Youghal who qualified in event 1 at the 2016 World IBSF Under 18 Championship in Belgium in August.

PJ Nolan was the Tournament Director on the day and all matches were the best of 5 frames and the Highest Break was 70 by Fergal Quinn. 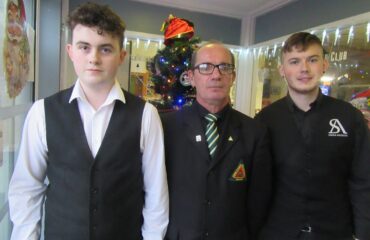