The National Billiards Championships, preliminary rounds down to the last four, took place at Celbridge Snooker Club on Sunday, 3rd April 2016. A total of 15 players contested the event, which meant that only one bye was awarded into the quarter finals and that was to the season’s No 1 seed, Aidan Murray (Ivy Rooms).

Eliminations in the first round were Robert McCrum (Portmarnock), John O’Sullivan (Kilkenny), No 4 seed Joe Doheny (Borris-in-Ossory), No 3 seed John Kehoe (Enniscorthy), Lloyd Myers (AOH Cork), Brendan Devlin (Celbridge), and Aonghus McAnally (Portmarnock). The first round also produced the most exciting and most closely contested match on the day when both players matched each other almost point for point throughout the whole 500 point match. In a nervous finish, Joe Doheny (Borris-in-Ossory) gradually drew 35 points clear of his opponent James Bateman (Kilkenny). Needing just 6 points for game, Joe played an in-off red, then a cannon but faltered on the shot he needed for game. James, needing 41 for game, seemed to gather his composure with a succession of pot reds. He then played a cannon, potted white, which set up a final pot red to take the game 500-499 with an unfinished 43.

In the quarter finals, to decide the semi finalists who will play at the RIBSA National Championships in May, the top seed, Aidan Murray (Ivy Rooms) and Rodney Goggins (Wexford) had easy wins over Liam O’Brien (Borris-in-Ossory) and James Bateman respectively, James perhaps somewhat drained after his close opening round encounter. By contrast, the other two quarter finals produced close and exciting games. Eugene Hughes (Baltinglass), having trailed for most of his match against Kilkenny veteran Larry Drennan, but never by very much, eventually came out the victor by 44 points at the finish. An even closer quarter final took place between No 2 seed Wayne Doyle (Q-Club Wicklow) and host club proprietor Phil Martin (Celbridge). Having established an early lead with a break of 85, Wayne saw his advantage being eroded as the exchange of visits brought the difference down to less than 20 points. This pattern was repeated throughout the game, Wayne establishing an advantage only to see it being whittled away but never actually reversed. With the slender lead of a mere 12 points, Wayne, in a final determined attempt to take command, produced his best billiards of the day to take the game with an unfinished 84.

Congratulations and best of luck to Aidan, Rodney, Eugene and Wayne who won through to their places in the Final stages to be played as part of the RIBSA Finals weekend in May.

Our thanks are due to Phil Martin and the staff at Celbridge Snooker Club for their help on the day. 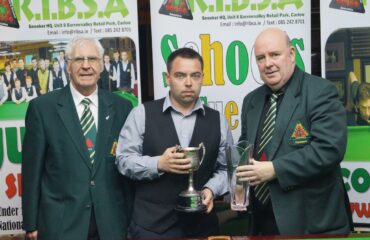