The sixth tournament of the Senior Billiards series was played at Celbridge Snooker Club on Sunday, 6th March 2016, played in 90 minute timed format. Former Billiards Double Champion Rodney Goggins (Wexford), having had little success this season so far, enjoyed the sweet taste of victory when he took his first tournament win of the season.

The semi finalists in the top half of the draw were Aidan Murray (Ivy Rooms) and Joe Doheny (Borris-in-Ossory), Aidan having had an emphatic quarter final win against Gavin Farrell (Dun Laoghaire) while Joe came through a tight and well contested quarter final match against Larry Drennan. In an exciting semi final, Aidan clawed back a significant deficit to draw level in the last moments of the game. In the scramble to the finish, Joe came to the table 9 points in arrears. After a cannon, then an in-off red which left the red in baulk, Joe, playing a swinger off the white, inadvertently scored a 4-shot. With the red in baulk, the scores level and less than fifteen seconds left on the clock, Joe could not afford to play a miss. In the event, he glanced off the red, unfortunately leaving his ball in play. Aidan’s next shot was an in-off white to the middle, but the clock ran out an instant before he played his stroke. The result was a tied match 269-269. For the first time ever the tournament rule covering a tie was invoked. This meant that play stopped, the players strung and played for a further 9 minutes. After the restart, there was a nervy exchange of low scoring visits until Joe took advantage of the first favourable leave, allowing him to settle in to his natural in-off game. As the minutes ticked by, he became visibly more relaxed, running out with a well constructed 58 unfinished break.

The semi finalists in the bottom half of the draw were Rodney Goggins (Wexford) and Wayne Doyle (Q Club, Wicklow), Rodney having a relatively unchallenged quarter final win against John Kehoe (Enniscorthy) while Wayne won a high scoring quarter final against Brendan Devlin (Celbridge). In the semi final, Rodney scored the better of the two, finishing just over 100 points clear of Wayne, mainly the result of two breaks of 53 each.

The final got off to a spirited start, both players scoring freely at each visit. About twenty minutes into the match, however, a series of errors crept into the game. While both struggled to regain some form, Rodney, perhaps drawing on his top level hard snooker match play experience, was able to steady himself sufficiently to produce regular 30-plus visits. Joe, on the other hand, was finding it difficult to develop any consistency, even missing more than a few half-ball strokes which are the hallmark of his usually reliable game. With Joe unable to produce any significant response, Rodney went on to claim a well deserved tournament win by more than double scores.

The next Senior Billiards event of the season will be the Long-up championships down to the last four and takes place at Celbridge Snooker Club on Sunday, 3rd April 2016. Entries will be accepted before 10.30am on the morning of the event.

Our thanks are due to Phil Martin for the excellent playing facilities and to all at Celbridge Snooker Club for their help on the day. 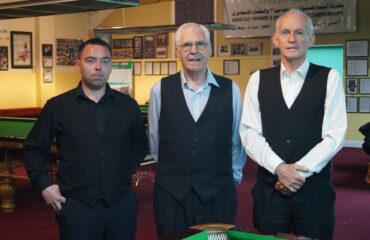