Aaron Hill from the Crucible Snooker Club in Cork won the third RIBSA Under 14 Snooker Ranking event of the season in the Ivy Rooms Snooker Club on Sunday the 6th of March. In the final Aaron beat Noel Gleeson from the New Institute, Nenagh SC 3 frames to nil.

Aaron now qualifies and joins John Landers from Youghal and his team mate Sean Walsh from the Crucible on the 2016 Irish Celtic Challenge Junior Team.

12 year old Noel should also be very proud of himself as he played great snooker today and he moves up on the rankings and is a real star of the future.

In the Semi Finals stage it was the No.1 seed Joe La Cumbre Portarligton SC playing the No.4 seed Noel Gleeson from Nenagh while Ryan McGuirk from Navan was up against the No.2 seed Aaron Hill from the Crucible.

Both matches were excellent with Noel beating Joe 3 frames to 1 while Aaron beat Ryan 3 frames to nil.

The High Break prize also went to Aaron Hill with a superb 46 Break.

Our National Coach PJ Nolan was the Tournament Director and he was very impressed again with the amount of young talented players on show. The Next event is the RIBSA National Under 14 Championships on March 26th in the Ivy Rooms and it promises to be a fantastic event. 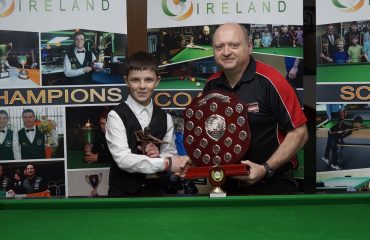