The players are all unbeaten and have recorded 20 straight wins in a row and all will go into their last match focused on winning their groups.

Michael Judge beat Marek Zubrzycki from Poland 4 frames to nil with a top break of 71. Michael will now play Paul Schopf from Austria in his last match Wednesday at 2.30pm

Brendan O Donoghue beat Sascha Breuer from Germany winning the decider 4 frames to 3. Brendan will now play Simon Lindblom from Sweden who is also unbeaten to decide the group winner.

Jason Devaney had two wins today when he beat Piotr Murat from Poland and then he beat Marian Kepsta from Slovakia 4 frames to nil with breaks of 60 and 85. Jason will now play Rune Kampe from Denmark later today to decide the group winner.

Ryan Cronin is having a great tournament in his first senior European and he beat Maurice Le Duc from the Netherlands 4 frames to 2. Ryan will now play Vladan Niskic Serbia later today at 6pm.

Josh Boileau beat Hans Nirnberger from Austria 4 frames to nil last night. Josh will now play Massimo Ciaghi from Italy at 2.30pm and then Belan Sharif from Sweden at 8pm. 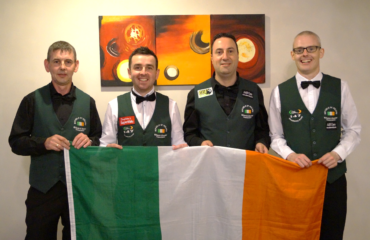