Day 2 of the 2015 IBSF World Snooker Championships here in Hurghada, Egypt had two wins out of three matches for our Republic of Ireland players.

Rodney Goggins was on first at 10am against Mohamed Abdel Hakim from Egypt and the Wexford man played solid and won 4 frames to 1 to stay unbeaten in the championship.

David Cassidy was involved in the match of the day against Michael Collumb from Scotland but the Cork man was beaten 4-3 in a trilling match but again David should be happy with his effort as the match was very close and i know he will bounce back tomorrow.

Greg Casey finished off the day on with a 4-0 victory over Epaminondas Pouris from Cyprus and he is also unbeaten with two wins from two matches.

Our RIBSA masters Alan Matic and Tom O Driscoll had the day off. As National Coach I was again very happy with the commitment of the players. We now have practice booked in for tonight to help the players get used to playing conditions in the marquee.

Muldoon Turns On The Style 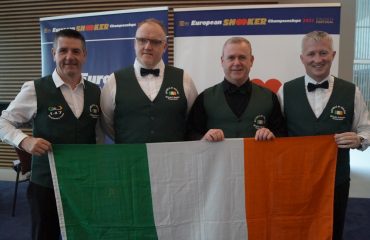