Aidan Murray from Wicklow started the season on a winning streak when he beat Wayne Doyle from Dublin in the Final of the first RIBSA Billiard Ranking Events of the season.

The first tournament of the Senior Billiards series was played at The Ivy Rooms Snooker Club, Carlow on Sunday, 13th of September 2015, the format being best of three games of 150up. Aidan Murray (Ivy Rooms) opened his season in emphatic style, sweeping to victory in almost unstoppable form, scoring 50-plus breaks in every game and winning every game almost unchallenged.

The semi finalists in the top half of the draw were Wayne Doyle (Q Club, Wicklow) and Rodney Goggins (Wexford), Wayne having had a solid 2-0 win in the quarter finals over Eugene Hughes (Baltinglass) while Rodney had an equally impressive win over Celbridge player Brendan Devlin. In the semi final, Rodney struggled to find form and although Wayne was not really playing his A-game, it was enough to see him through to his place in the final.

The bottom half of the draw was quite a protracted affair, with two preliminary round matches and a quarter final going the whole distance without much difference in scores between the players. The eventual semi finalists were Aidan Murray (Ivy Rooms) and John Kehoe (Enniscorthy), Aidan having a solid 2-0 quarter final win over Joe Doheny (Borris-in-Ossory) while John emerged the winner of a close tussle in his quarter final against Robert McCrum (Celbridge). By comparison with the earlier rounds, the semi final was a free flowing game, Aidan earning his place in the final virtually unchallenged by John.

In a fast paced and high scoring final, Aidan established a comfortable lead and with the scores standing at 142-34, looked poised to take the opening game. Wayne, in response, settled into his game but, unfortunately for him, when his break stood at 66 and he was in sight of recovering the deficit, he lost position at the top and in trying to retrieve it, having to cue over the intervening ball, fouled by jumping the object ball while attempting a screw-back cannon. With the consequent two point penalty and three white losers from the re-spot, Aidan had the first game in the bag. Although Wayne lost no composure from his mishap in the first game and despite an impressive 64 visit in the next, Aidan, more than matching Wayne’s scores, took the second game with breaks of 59 and 57 unfinished to claim a well deserved tournament win.

The next Senior Billiards round of the season takes place at The Ivy Rooms Snooker Club, Carlow on Sunday, 11th October 2015. The format will be seeded draw 400up, 90 minute time limit. Entries will be accepted before 10.30am on the morning of the event. 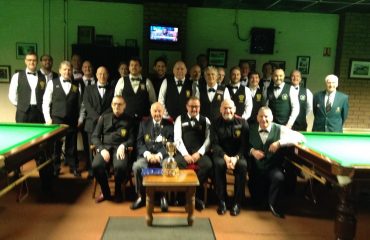