On Wednesday the 9th of September, Ballinasloe Snooker Club in Co Galway were the latest club to avail of a free RIBSA Snooker Coaching Session with our National Coach PJ Nolan.

Leading Ballinasloe snooker player Paul Keighery who is also a RIBSA Coach and his Committee are working very hard developing junior snooker in the town with regular coaching within the club. Paul ” said it was great having PJ who is one of the World’s top snooker coaches here today as it will only encourage more juniors to take up the sport in the town”.

The club already boasts of many major titles as Paul is the current Galway County Snooker Champion, Players Championship Winner and Cities Singles Champion. Other leading club player is Colvin O Brien who won the National Intermediate Champion back in 2014. It is hoped that more players will follow in their footsteps and onto the International teams in the future.

During the coaching today PJ worked on improving the players, Stance, Grip, Bridge, Cue Action. All the players practiced training routines to work on their potting skills, cue ball control and safety game. PJ ” said that he was very impressed with the snooker club who have two beautiful Shender match tables and also the amount of talented juniors who attended the coaching today.

This season the Republic of Ireland Billiards & Snooker Association are offering every registered RIBSA club this season a free coaching session with our National Coach to help promote the game around the country.  If any RIBSA Affiliated Club would like to hold a coaching session they must contact RIBSA directly by Email to  info@ribsa.ie and request this offer. PJ will then contact the club by email to arrange and confirm a suitable date and time.

The start time will be up to each club and once the date and time is confirmed within PJ’s Diary then the training session will be held and a report will be published on the RIBSA Web Site. Please Note : Only emails sent directly to RIBSA can arrange a free session.

The only cost to the snooker club is the travel cost of bringing PJ to the club at €20.00 per hour travel time to and from Carlow town. I.e., 2hr journey to the club from Carlow will be a total of €80.00 to the club. Only current 2015 registered clubs can avail of this offer but if any club wishes to join this year and become a registered club they should download the form from the download section in the top menu of the site or contact RIBSA for a club registration form to be emailed to them.

If any RIBSA player would like to book a private session

If any RIBSA player would like to book a private one to one lesson they should email PJ on pjcoach147@hotmail.com for his next available date. The cost of holding a coaching session is €20.00 per hour travel time from Carlow plus €20.00 per hour coaching fee ( Min 2 hrs ). All tolls and parking fees must also be paid if needed.

If you would like to travel to the Ivy Rooms Snooker Club in Carlow you can avail of a 2hr session for €65.00 which includes Lights, DVD of the lesson and Technique profile. 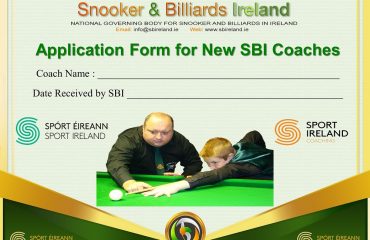