Among the first round eliminations were Brendan Devlin (Celbridge), John Kehoe (Enniscorthy) and Robert McCrum (Celbridge). The first round also produced the most exciting and most closely contested match on the day when both players matched each other almost point for point throughout the whole 500 point match. In a nervous finish, both players needing several visits in an effort to cross the line, Aonghus McAnally (Portmarnock), needing one more score to win, faltered when attempting a difficult cannon, allowing his opponent Joe Doheny (Borris-in-Ossory) to come from behind and score the 9 points he needed for game.

In the quarter finals, to decide the semi finalists who will play at the RIBSA National Championships at the end of May, the top seed, Wayne Doyle (Dun Laoghaire) and the No 3 seed, Larry Drennan (Kilkenny) had easy wins over Lloyd Myers (AOH Cork) and Joe Doheny (Borris-in-Ossory) respectively, Joe perhaps somewhat drained after his close opening round encounter. By contrast, the No 2 seed, Aidan Murray (Ivy Rooms) and the No 4 seed, Rodney Goggins (Wexford), came through much closer games against Liam O’Brien (Borris-in-Ossory) and Eugene Hughes (Baltinglass), Rodney taking his game with the day’s high break, a magnificent 125.

Congratulations and best of luck to Wayne, Aidan, Larry and Rodney who won through to their places in the Final stages to be played as part of the RIBSA Finals weekend at the end of May.

As always, our thanks to Marian Leacy and the staff at the Ivy Rooms Snooker Club for their help on the day and indeed throughout the season. 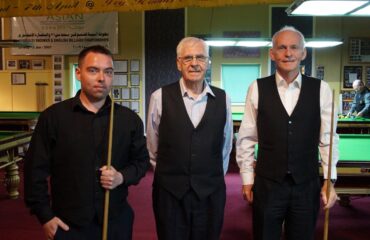