Both Irish players were beaten in the last 32 of the EBSA Under 21 Snooker Championships here in Dolmen Hotel, Malta tonight.

Josh Boileau was beaten by Rodion Judin from Latvia 4 frames to 2. Josh played solid to win the opening frame but his opponent got stronger and came back to lead 1-3 before Josh came back into the match to close the gap to 2-3. The next frame Josh had his chances but it was not his day and he crashed out of the event 4-2.

Shane Bates was beaten in a seven frame thriller against Vladu Mihai from Romania. The wexford man won the opening frame but lost the second on the black. Shane then won the third but again lost the fourth frame on the black. He then went 3-2 up before his Romanian opponent fought back to put the Irishman out 4 frames to 3.

As National Coach I am very disappointed all our players are out and we will now analyse everything tomorrow and improve on the areas that cost us frames and victories in this championship.

Every RIBSA player gave 100% and I am proud of them all but we will train better and come back stronger in the next Championship.

The full draw is available here 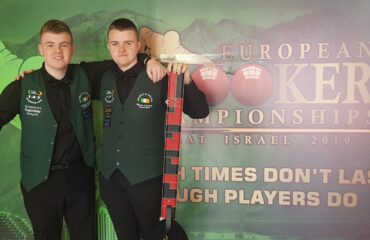