The fourth tournament of the Senior Billiards series was played at The Ivy Rooms Snooker Club, Carlow on Sunday, 14th of December 2014. The event was played in the short format, all rounds being best of three 150up. Wexford’s Rodney Goggins, already one of the country’s top snooker players, yet again proved why he is also reigning Billiards double champion by taking the fourth tournament title of the season.

With a relatively small entry of 11, the three who bowed out at the pre-quarters stage were Aonghus McAnally (Portmarnock) and John Kehoe (Wexford), while the furthest-travelled contestant, Lloyd Myers had little reward for his long journey from Cork.

The semi final in the top half of the draw was a repeat of last month’s final when current double champion and last month’s winner, Rodney Goggins (Wexford) met the No 1 seed, Wayne Doyle (Dun Laoghaire). Rodney progressed to the semi final having had a solid win in a closely contested quarter final against Joe Doheny (Borris-in-Ossory) while Wayne had an impressive win over Robert McCrum (Celbridge). In the semi final, Wayne, struggling against a sudden loss of form lost the first game by 35 points. Sensing the weakness that crept into Wayne’s game, Rodney quickly wrapped up the second game before Wayne had a chance to score, taking the semi final 2-0.

The semi finalists in the bottom half of the draw were Liam O’Brien (Borris-in-Ossory) and Larry Drennan (Ivy Rooms), Liam having had a good quarter final win against Brendan Devlin (Celbridge) while Larry, helped by the day’s high break of 92, overcame Aidan Murray (Ivy Rooms) in a tight and closely contested quarter final. Although he played valiantly in the semi final, Liam found himself pitted against an in-form Larry, who claimed his place in the final scoring breaks of 60 and 67 in the process.

The final was very much a one-sided game. Larry, suffering the effects of a long and tiring day, could not match Rodney in terms of scoring power. Rodney, on the other hand, having come through the shorter half of the draw, seemed refreshed after resting until Larry’s semi final ended. With breaks of 82 and 60 (unfinished), Rodney lost no time in claiming victory in the season’s fourth tournament.

By way of compensation for his first round defeat, Joe Doheny won the final of the Plate against Cork’s Lloyd Myers.

The next Senior Billiards event takes place at The Ivy Rooms Snooker Club, Carlow on Sunday, 18th January 2015. The format will be best of 400up, seeded, 90 minute time limit. Entries will be accepted before 10.30am on the morning of the event.

To Billiards players everywhere, and indeed to all supporters and readers, on behalf of RIBSA Billiards players, we wish one and all a Very Happy Christmas and Best Wishes for the New Year.

Results(all matches best of three 150up): 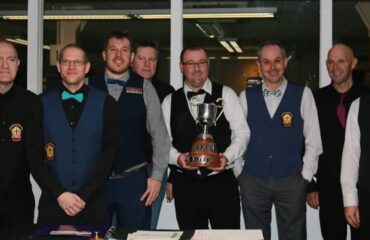 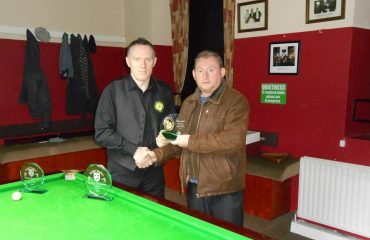