The draw has just been made for our RIBSA Masters Snooker players Tom O Driscoll, Stephen Walsh, Keith Sheldrick and Anthony Bonnar in the 2014 World IBSF Masters Snooker Championships here in the Kanteerva Indoor Stadium, Bangalore.

Keith Sheldrick is seeded at no.13 and will play the winner of Kamaraj SH from India or Wayne Morgan from Wales in the Last 32 after the Irishman had won his group.

Stephen Walsh will play his team mate Anthony Bonnar after both players were drawn against each other in the Last 64 and the winner will play the number 3 seed Darren Morgan in the Last 32.

Finally our other Irish player Tom O Driscoll has been drawn against Karim Abdelmeguid from Egypt and the winner will play No.14 Seed Wayne Browne from England.

There still is no internet available in the venue but you can follow all the action on www.ibsf.info web site

All matches – 5hrs.30min ahead of  Irish time 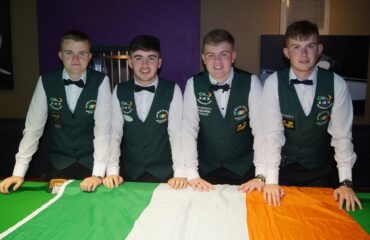