Our National Snooker Coach PJ Nolan held a successful two day RIBSA training camp in the Ivy Rooms Snooker Club in Carlow this week on the 15th & 16th of October to prepare our RIBSA players for the 2014 World IBSF Snooker Championship which takes place in Bangalore, India from the 17th – 30th November.

The Irish Players who will represent our Association this year will be Robert Murphy, Michael Judge, Josh Boileau and Jason Devaney in the men’s event and the Masters players will be Tom O Driscoll, Stephen Walsh and Keith Sheldrick were all invited to attend the camp.

Day 1 of the camp was all about recording each players technique and developing good fundamentals plus working on the mental side of the game which is crucial when playing at this International level.

Day 2 was practicing various training routines to improve their scoring, long potting and match-play. The training on both days was from 11am – 4pm on the same Shender tables that will be used in India. PJ who is one of the leading world coaches put the players through their paces working on all areas of their game plus developing their own specific preparation plan.

Each player received a DVD of their play from the camp and all the players received sports psychology audio and booklets to help with their mind fitness.

Travelling to the 2014 World Championships in India with the RIBSA players will be the Irish team Coach PJ Nolan and RIBSA Referees Ger Murray, Don O Donoghue and Paddy English. RIBSA wish all the players and officials the best of luck over in India.

RIBSA would like to thank Marion Leacy and the Ivy Rooms Snooker Club for the use of the Club over the two days as the playing conditions were perfect for the players.

Would you like to book your own session with PJ

If any RIBSA player or RIBSA club would like to like to book their own coaching session with Our National Coach PJ Nolan who is one of the world’s top coaches they should email pjcoach147@hotmail.com for his next available date. 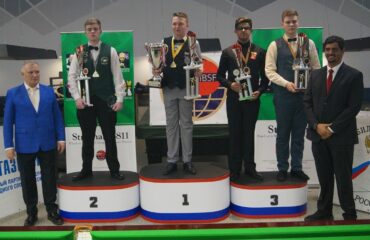