The first Senior Ranking Points Tournament of the season was held at the North West Snooker Club this weekend. The club is celebrating being open 30 years this October and was delighted to welcome some of the best players from around the country. There was a great turnout to the occasion with 48 players registering and playing on the day.

The top half of the last 16 line up saw No1 seed Robert Murphy overcome Anthony Bonnar from the North West in a quick 3-0 match. Letterkenny man Christopher Gibbons lost out on a place in the quarter finals to Greg Casey 3-1.  In a shock defeat, John Sutton lost 3-0 to Tony Seymour and a tight battle saw Daniel Dempsey lose out to Mark Owens 3-2.

In the bottom half of the last 16 draw, No3 seed Rodney Goggins marched on with a 3-0 defeat over Gareth Kirwin.  Colm Gilcreest also moved on after overcoming Aaron Moyles 3/1.  In the bottom quarter a titanic battle took place between John Connors, who had a 103, and Brendan O Donoghue.  The experience of the Tipperary man proved to much for John and Brendan ground his way to a 3/2 victory.  North West man Aidan Devenney also fell in this round to an in form Michael Judge from Dublin.

In the Quarter finals Robert Murphy ground out a victory over Cork man Greg Casey despite Greg having a 101 and 61 break.  In the next match the surprise player of the day Tony Seymore moved past Mark Owens after a battle royal 3/1.  In the bottom half, tournament favourite Rodney Goggins overcame Colm Gilcreest (Masters Champion) by 3 frames to 1, Rodney had 81 and 60 breaks.  In the last match of the quarters Michael Judge came back from a 2 frame defecate to win 3/2 over Brendan O Donoghue.

In the semi finals top half favourite Robert Murphy eased past Tony Seymore by 3/0.  In the bottom half Michael Judge went in to a two frame lead only to be overtaken by “The Machine” Rodney Goggins.

The final saw the in form Murphy take a two frame lead with a break of 103 in the second frame  which matched the high break of the tournament.   Once again Goggins ground back with breaks of 106 in the third frame, 95 in the fourth and 67 in the final frame to win the tournament 4 frames to 2.  Goggins also took the high break with his 106 in the fourth frame.  Congratulations to Rodney who takes the RIBSA Classic cup home for the second year in a row.

RIBSA would like to thank the North West snooker club in Letterkenny for the use of the fantastic facilities and warm hospitality over the weekend. 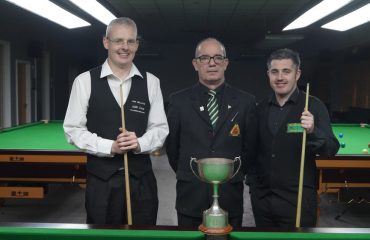