Andrew Yeates from Navan won the RIBSA Intermediate event one in The Classic Snooker Club in Finglas Dublin today on Saturday 27th of September. In the final he beat Colvin O Brien from Carlow in a very close final.

RIBSA would like to thank the Classic SC for holding the event and making it such a success on the day. Event 2 will be held in the Crucible SC in Cork on the 26th of October.

26th October : Event 2 will be held in the Crucible S C Cork

29th November : Event 3 will be held in the Ivy Rooms S C

20th & 21st December : Event 4 will be held in the New Institute Nenagh

21st February : Event 5 will be held in the Northwest S C Letterkenny

21st March : Event 6 will be held in the Celbridge SC

25th April : National Intermediate Championship will be held in the Ivy Rooms SC

2.      The following players are ineligible to play:

3.      Entry fee €20 for seniors and €10 for juniors (Under 21). Under 16’s are free. All entries must be submitted to host club or RIBSA text number or as advertised on RIBSA Website and must be received no later than Friday12noon prior to commencement of tournament.

4.      Neat dress is essential for all matches, e.g. trousers and long sleeved one-coloured shirt, buttoned at the wrist. Jeans, tee shirts, jumpers or sneakers are not acceptable.  Any player not conforming to this rule may be disqualified and will forfeit his/her entry fee.  The Tournament Director shall determine the quality of dress.  Waistcoats must be worn from Last 16 onwards. International waistcoats are not permissible.

6.      Competitors must identify themselves to the Tournament Director at Control Desk prior to commencement of match.  At the match time, the names of players will be called; a table will be allocated subject to availability.  Any player not at the Control Desk at the time appointed for the match will forfeit one frame for being 15 minutes late or part thereof and one frame every five minutes thereafter.  This penalty will apply even when no table is available.

7.      The Prize Fund will be dependent on number of entries.

In calculating prize money, two juniors will be counted as one entry. Complimentary entries will not be included.

8.      Ranking points will be awarded for each match won, a bye or a walkover, provided always that the player plays in subsequent rounds of the tournament.

Ranking points will be awarded as follows:

9.    An Intermediate Championship will be held at the end of the season after the final Intermediate Ranking Tournament. Trophies will be awarded to Winner and Runner-up.  Prize money will be paid as normal less the cost of trophies.

10.  All players must abide by the Constitution and Rules of the Republic of Ireland Billiards and Snooker Association.  By signing the Player Registration Form, all players understand that Drug Testing can be carried out at any time and consent to this. RIBSA competitions are subject to the Irish Sports Council Anti-Doping Rules. 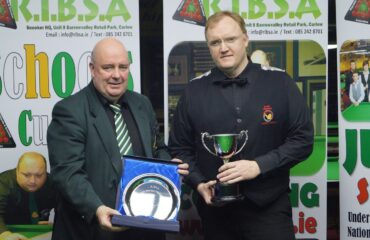