16 year old Stephen Bateman from Kilkenny SC won his first Senior title when he won the RIBSA Handicap Open NO.5 in the Ivy Rooms Snooker Club in Carlow on Saturday 22nd of February. The event was played in groups with two players from each group qualifying for the knock outs stages. All Group matches were the best of 3 Frames. All knock out matches will be best of 5 frames

Stephen Bateman who will be travelling to Romania next month for the European Under 21 Championships was in superb form in beating Celbridge player TJ Dowling 3 frames to 0 in a high quality final.

In the Semi Finals TJ Dowling beat Rodney Goggins and Stephen beat Paul Keighery from Ballinasloe in the other semi final.

Bateman played awesome snooker all day and after his three days training camp with our National Coach PJ Nolan this week in the Ivy Rooms his hard work paid off with his best match-play snooker. Stephen will be our youngest player in the European Championship in Romania next month but this win will be great for his confidence. 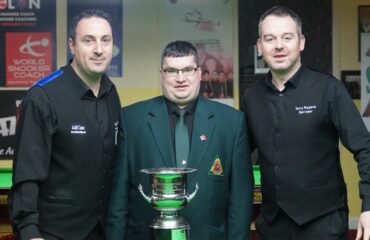