In the final the Dublin man beat Robert Redmond 8 frames to 5 in a unbelievable match to take the National title and qualify for the World Amateur Championships in Latvia next November.

Robert Redmond should also be proud of his performance this weekend with superb wins over Brendan O Donoghue and Robert Murphy. As the National Coach I believe Robert’s day will come soon but Michael Judge was on a different planet this weekend as he showed his skill and experience to lift the Irish Title.

A big thank you must go to Marion and the Staff at the Ivy Rooms for the great facilities for the Championship weekend.

Jim Leacy RIBSA Chairman and IBSF President presented Michael with his trophy and Perpetual Cup which is in memory of Jim’s Dad in front of the large attendance in Carlow.

The High Break prize went to Robert Redmond with a 119 Break in his semi final match. 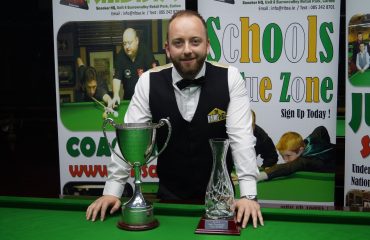