Rodney Goggins has been in superb form this season winning two of the seven ranking events played to date and never being out of the semi finals all season. He is virtually guaranteed the No.1 spot already sitting 130 points above his nearest rival Joe Delaney.

With the Main Tour spot now gone perhaps the championships will gain back more prestige with the title more important than the tour ticket that somewhat overshadowed it in previous seasons. Rodney had already stated that he wasn’t taking up any potential main tour spots anyway and his main target this season was the championships.

It may be hard to believe but it’s now 12 long years since Rodney captured the Irish Championship Cup thanks to a thrilling 8-7 victory over Gary Hardiman back in 2000. Since then Rodney has appeared in only one more final despite a huge haul of ranking titles.

The Wexford man did however pick up a few Irish No.1 title’s during that time and thus spent a good few years on the Main Professional Tour. In his occasional absence the championships has been won by seven different players in the preceding 11 years.

Martin McCrudden, Jason Watson and Brendan O’Donoghue won the next three championships from 2001-2003 before the championships was dominated by one man, or should I say child.

David Morris (pictured) was only 14 when he picked up his first title defeating Rodney 8-4 in the final and he went on to win the event twice more beating Brendan O’Donoghue 8-2 both years. As a reward for this achievement Morris was presented with the Championship Cup at the AGM that year and a new Cup was sponsored by the Leacy family.

2007 saw the emergence of yet another junior in Vincent Muldoon who reached the final at only 15 beating John Torpey 8-2 in the final and followed it up with a 8-4 win over Gary Hardiman in 2008 before joining the Main Tour for a season where a close 10-8 defeat to Jimmy White in the World Championships Qualifiers knocked him back to the amateur ranks.

2009 saw Martin McCrudden capture his first title in eight years beating David Hogan in the final and he made it a hat trick of wins the following year with a 8-6 win over Muldoon. Last year as you will remember we had a new name on the cup as Jason Devaney proved he could mix it with the big boys of Irish Snooker as he saw off David Hogan 8-6.

So what will happen this year, can Devaney follow the trend since 2004 of multiple time winners or will Goggins finish off his season in style and achieve his main goal of getting his name back on the cup. The rest of the pack will have a lot to say about it and the likes of Delaney, O’Donoghue, Muldoon and co. will all fancy their chances come the 13th-14th of May when the event kick’s off in Carlow.

The Irish snooker season like the economy has suffered a huge blow this year with dwindling numbers attending the ranking events but the championships are a little bit special and hopefully there will be a few cues dusted down over the next week or so. The best of 7 frame format over the two qualifying days in Carlow makes this event stand out and with the superb Northwest Snooker Club ready to welcome the quarter finalists on the 26th-27th hopefully we will see numbers like we used to lining up for a crack at the title. 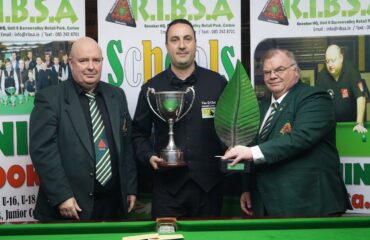 Star Line up for Q-Finals in Northwest