THE Crucible’s Daniel O’Regan was crowned Cork County under 19 champion in his home club the Crucible who hosted the event last Sunday afternoon.

With the standard of snooker so high at the moment in Cork at under age level anticipation of a top class tournament was expected with the event littered with under age international players.

Play got under way at 12 Noon and right from the start it was going to be exciting with the home club player and defending champion David Cassidy drawn against Youghal CYMS player Aaron Tobin in the first round, with Cassidy coming out on top by two frames to nil.

Two other locally international based players at the Crucible Ryan Cronin and Daniel O’Regan also recorded easy first round victories and an early tussle between the Youghal duo, Kenny Wight and Christopher Cooney went to a deciding frame with Cooney coming out on top.

Ryan Cronin was pushed all the way in his second match by Adam Fitzgerald from Youghal, but Cronin made it through with a frame ball blue, in the deciding frame.

Cassidy kept on track to retain his title with a two frame to nil victory over Cooney in the quarter finals. The semi finals contained three Crucible players, Cassidy, O’Regan and Cronin and Lee Walsh from Youghal CYMS making up the last four.

Cassidy took the early advantage with a two frame lead over Cronin, but Cronin won the third frame, but it wasn’t enough as Cassidy was through to the final winning the deciding frame and was just one match away from defending his title.

There was a similar story in the other semi final where Walsh pulled back two frames after going two frames behind. It was the tightest of deciders with O’Regan potting the pink to progress through to the final.

Daniel O’Regan was excellent in the final recording a three frames to nil win over Cassidy winning the Cork County under 19 title. The final was a swift affair played in under an hour and now the Crucible man who resides in Macroom will take this win as a real shot of confidence going into the Munster snooker club championships.

In the ‘Munster Close’ snooker championship held in Limerick at the ‘New Vic’ snooker club Cork’s Greg Casey proved unbeatable recording a fantastic victory defeating Gary Bracken in the final by four frames to two frames, but the story of the tournament was Casey’s victory over Limerick’s John Torpey in the semi final.

The win was a terrific scalp for the Cork man winning a very famous cup that has been in existence since the 1930’s and will be treasured in the Casey home. Casey told Rebel snooker “When I was nearly out of the competition in the semi final I was hoping for just one chance and thankfully I got that chance to get back into the match and from there on it was 110% concentration. Snooker is all about momentum and when I won that fourth frame I had the momentum going into the final frames, naturally I was delighted to win those and progress through to the final and to eventually win the tournament was brilliant and I am thrilled to have won”.

Casey is flying high in the senior rankings and has shown he is quite capable of going all the way this year and most importantly for Cork Snooker he has sent a message out to everyone ahead of the Munster club snooker championships which gets under way in the Gleneagle Hotel in just ten days time.

The ‘Munsters’ has been a graveyard for Cork sides since Youghal CYMS’s famous victory over the Victoria snooker team from Cork in 2000. Since then no Cork side has even made the final and in recent years the Crucible have been the only side to make it through to the All Ireland club snooker championships, with Youghal CYMS scooping the All Ireland snooker club plate award with a victory over Minnesota from Ballymena in 2005. Now with Cork snooker at an all time high in terms of leagues, international representation and strong under age structures it is hoped that the chances are a little better this year going into the event.

Tournament Director of the Munster snooker clubs championship Connie O’Sullivan told Rebel Snooker “Cork teams are a vital part of this event and even though they haven’t won it in quite some time they still pose a massive threat to all the other county sides. Youghal CYMS celebrate their 25th consecutive visit to us in Kerry and as well as having a realistic chance of repeating that famous win back in 2000 they bring massive support to Killarney which certainly adds to the occasion. The Crucible are very strong and I expect them to go a long way again this year, plus the AOH, Douglas and Fermoy always are tough to beat in the ‘Munsters’.

In the Cork Billiards and Snooker Association (CBSA) Cork snooker league, play resumed tonight where Douglas ‘A’ host the AOH and Thursday evening Youghal CYMS travel to the Crucible. 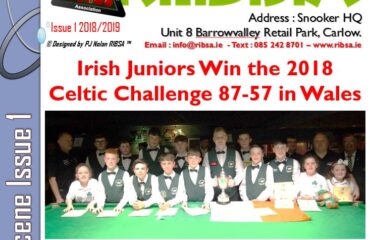