Martin and Karl Busteed, owners of Douglas Snooker Club the venue for the RIBSA National Under 21 and Under 19 Finals in March

WITH 2012 Just one day old, sights are already set on some top tournaments in the month of January, plus the resumption of the Cork Billiards and Snooker Association (CBSA) Cork Snooker League on Thursday the 12th of January.

Next up this coming weekend will be the Cork County under 19 snooker championships which will be held at the Crucible snooker club and as the standard of under age snooker is so high at present in the ‘Rebel County’ anticipation ahead of the event is electric and there will be some top class performers like Youghal CYMS player Aaron Tobin and the two excellent Crucible players David Cassidy and Ryan Cronin.

There is always a possibility of an upset and somebody coming out of the pack and a lot will depend on the draw, but if the recent RIBSA Intermediate tournament is anything to go by, the venue and the owners of the Crucible will do a fantastic job hosting this event.

As in the professional game where the players are getting younger it seems every year, the amateur ranks are the very same, with 15, 16 and 17 year old players contesting these events with every confidence and if Cork snooker is to prosper in the future, it needs these younger talented, fearless players coming through.

The Cork County under 19 championships takes place at the Crucible on Sunday next the 8th of January, but on this coming Saturday the ‘Munster Close Snooker Championships’ will take place in Limerick City at the ‘New Vic’ snooker club and amongst the Cork players travelling will be the Crucibles Greg Casey who at the moment is playing excellent snooker in the top amateur ranks at senior level. There is no doubt but the standard in Limerick will be very high and it will take something special for a Cork player to take the title home, but if Casey is in the mood he is quite capable of going all the way, best of luck to all the travelling Cork cue-men.

With just 19 days to the first break off in the ‘Munster Club Snooker Championships’ in Killarney at the Gleneagle Hotel, the Cork sides are preparing to do battle with Munster’s finest and with over a decade passed since a Cork team has lifted the coveted title, there is a real determination by the Cork sides to bridge that yawning gap. The Crucible have in recent years been the leading light for Cork snooker at this event, making it through to the semi finals in the last two years, qualifying for the ‘All Ireland Snooker Club Championships’ where in past years the likes of Mark Allen, Ken Doherty, Eugene Hughes and Fergal O’Brien have all played, but the Crucible to say the very least haven’t had any luck whatsoever in their past two semi finals and hopefully that will change this year for any Cork side who make it to the last four.

The ‘Munsters’ will begin on January the 20th and continue for three days and there will be a special feature on the Friday ‘Magazine’ in the Evening Echo on Friday the 20th of January.

Finally on this weeks Cork Snooker we catch up with Karl Busteed at Douglas Snooker Club on the south side of Cork City.

The Douglas venue is as good as any venue you are likely to see in the country, with an excellent ambience and superb table layout. The place is a real snooker club run by the Busteed brothers, Martin and Karl and the minute you walk in to Douglas Snooker Club you know that the level of play will be excellent and that is only matched by the very warm welcome you always get crossing over the threshold.

National Republic of Ireland snooker coach at the RIBSA Academy PJ Nolan at the Ivy Rooms in Carlow was blown away by the venue and had no hesitation awarding Douglas the Republic of Ireland Billiards and Snooker Association, national under 21 and under 19 finals. “We are delighted to be the hosts of the under 21 and under 19 national RIBSA finals here at Douglas Snooker Club, we will make sure that the event goes smoothly over the two days and we are delighted to showcase the club to the rest of the country” said Karl Busteed.

Busteed continued “We also host the ‘Cork Close’ snooker championship on the 19th of February where we expect a huge entry and a very high standard of snooker. Last year Anthony O’Connor was the winner, I am glad to say that Anthony is playing his share of snooker here in Douglas at the moment and it will take a good man to take it off him. The standard of the game here in Cork at the moment is very high indeed and there will be some great match ups I am sure come mid February”.

The Douglas venue, based in the Donnybrook Commercial Centre has everything in place to host major events like the ‘Cork Close’ and the RIBSA ranking events and there is great work being done for its members by owners Martin and Karl Busteed.

Anyone who wants any further information on rates, events and snooker in Douglas contact Martin or Karl at (021)4891203.

Next week on Rebel Snooker we take a look back at the Cork County under 19 snooker championships and preview the resumption of the CBSA Cork snooker league. 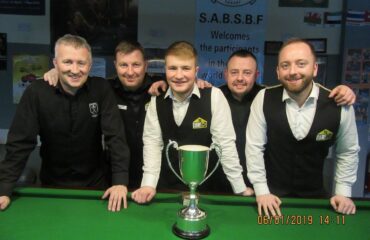